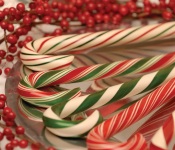 There are certain foods – usually sweets – that we buy or receive once a year around the holidays that lend nostalgia to the season (and a few inches to the waistline).  In our home, we usually kick off the season in mid-November with the purchase of a sweet Italian cake called Pandoro that my daughter sprinkles confectionary sugar over.

Sweet, airy, and buttery tasting, a pandoro or panettone (pandoro with dried fruit)  has the texture of an egg bread but the flavor of a cake.  Delicious with sliced berries, sprinkled with confectionary sugar, or just plain, we first discovered pandoro while living in Spain and can’t imagine the holidays without indulging in this Italian treat.

In the summer of 2010, Eataly, a 50,000 square foot Italian marketplace opened up at 200 Fifth Avenue between 23rd and 24th Street in New York City and has been described as both a foodie and non-foodie paradise.  For those who can’t get to New York City but want an Italian pandoro or panettone, go to the store’s website: eatalyny.com for a wide selection – more than a dozen varieties that range in price from $16 -$38. 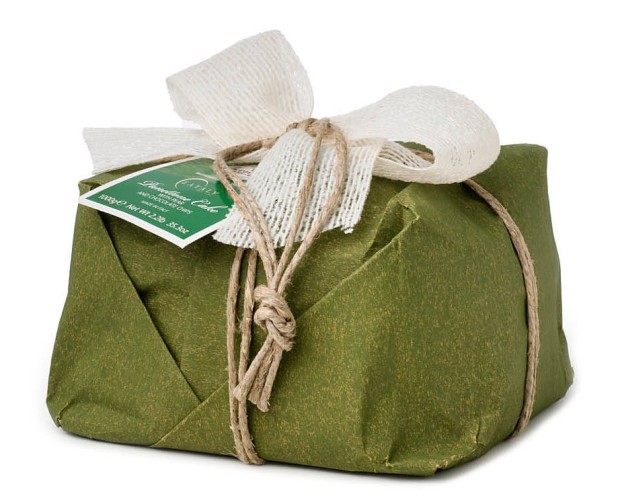 Eataly has a pear and chocolate pannettone  (pictured above) that weighs in at nearly 2 pounds. Made in Milan, Italy by the G. Cova & Co, each beautifully wrapped cake sells for $19.80 plus shipping.

Williams-Sonoma also sells a variation of the panettone with glazed chestnuts (as illustrated below) that is excellent. Made by a pasticceria called Scarpato from Milan, Italy, the panettone is light and airy despite its large size.

Each cake comes in a decorated tin to prevent the cake from being crushed during shipping. Simply remove from the tin, unwrap, place on a cake plate, sprinkle with confectionary sugar (packed enclosed), and serve. The best way to cut these cakes is with a bread knife moving gently back and forth so as to not crush the cake. 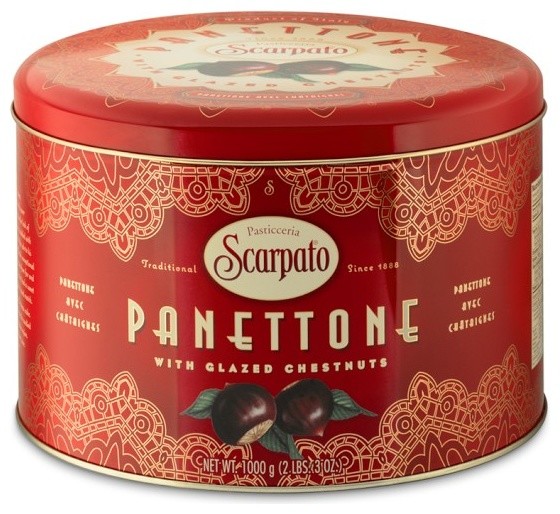 Every year, we receive a box of Enstrom’s Milk Chocolate Almond Toffee from my husband’s aunt and if the box doesn’t arrive my mid-December, everyone is asking where the almond toffee is. Enstrom’s is a family owned business based out of Grand Junction, Colorado that has been operating for more than 80 years producing their signature product: milk or dark chocolate almond toffee made with five ingredients: almonds, butter, sugar, milk chocolate, and salt. The toffee is a simple, old-fashioned delicious treat that we never tire of. When the box is empty and there are only fine crumbs in the bottom, sprinkle over ice cream for a final “au revoir.” 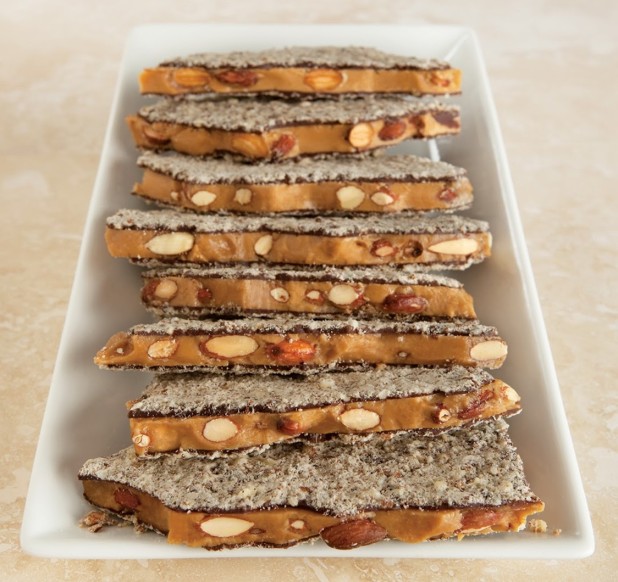 The almond toffee (milk or dark) is sold in a variety of sizes and boxes. A one pound box is $19.95 plus shipping. Order on-line at www.enstrom.com.

Candy Canes
The holidays aren’t the holidays without candy canes and a favorite is a made by a company called Hammond’s.  Hammond’s makes traditional candy canes in peppermint flavor but also makes the canes in cinnamon, cherry, root beer, cranberry, pomegranate, butterscotch, and more. 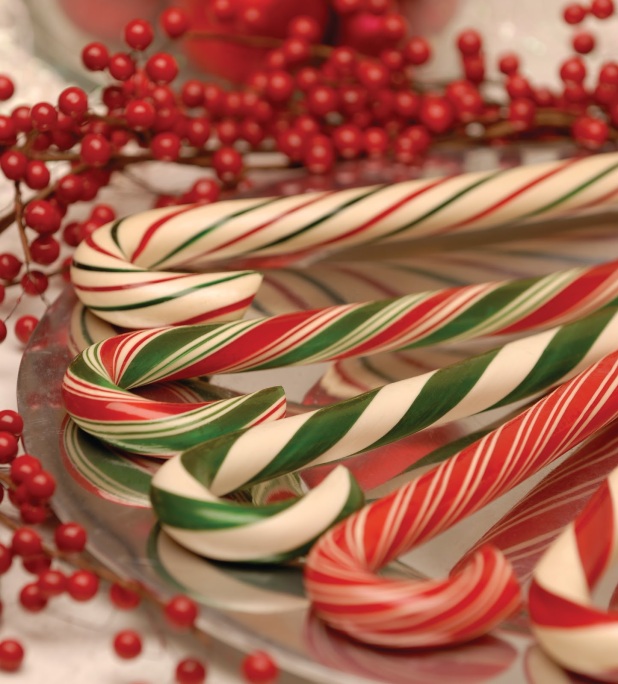 Each candy cane is $2.95 each or 12 for $30 plus shipping. Hammond’s also makes Hanukkah candies which can be ordered through the website listed below.  If traveling in the Denver area, consider taking a free tour of the candy making operation.  The tours run every half hour, Monday – Friday from 9:00 – 3:00 and on Saturdays from 10:00 – 3:00. 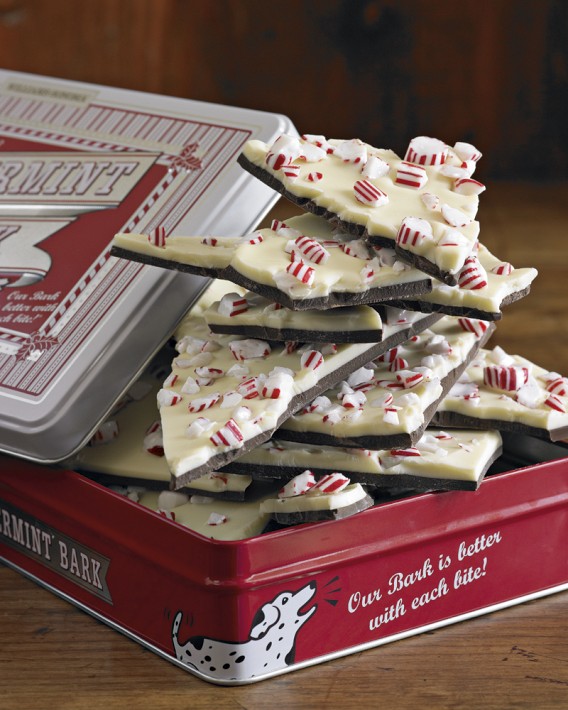 The bark is only available during the holiday season. Each tin has one pound of peppermint bark and retails for $26.95 or two tins for $47.95.  The bark is also sold in individually wrapped 1.2 ounce packets (4)  that sell for $10.00 at www.williams-sonoma.com.

Amy’s Cookies out of Brooklyn, New York makes fabulous cookies and during the holiday season, this star cookie maker produces exquisitely decorated cookies in a variety of shapes and sizes: Santa, sleighs, snowflakes, ornaments, gingerbread men, winter caps, mittens, sweaters, caps, and more. The cookies make a fabulous gift with each collection wrapped in a beautiful box tied with a grosgrain ribbon. Box collections range from $36-$68 plus shipping and can be ordered on-line at www.amyscookies.com. 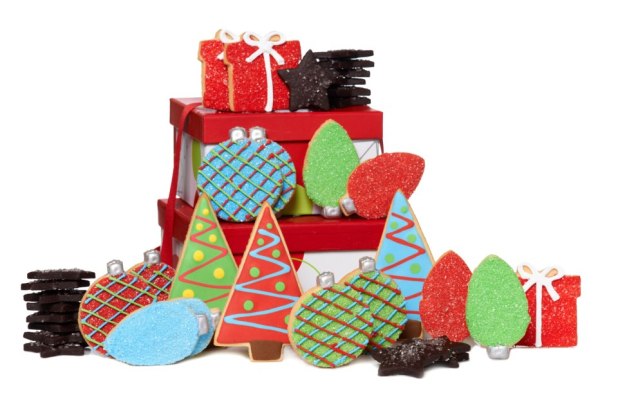 Polvorones are Spain’s version of shortbread – but with a hint of cinnamon and a bit more crumbly. Individually wrapped like a piece of salt water taffy, polvorones derive from the word “polor” which means powder and are made from almonds, shortening, sugar, salt, lemon, and usually cinnamon although there are many varieties. 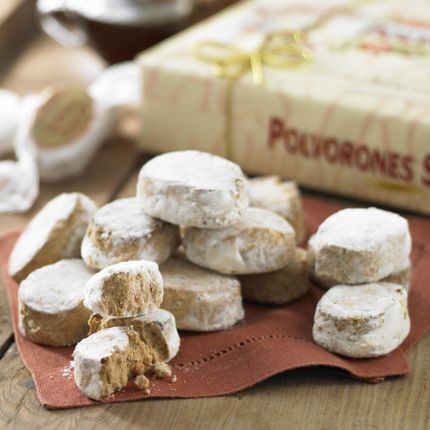 Polvorones are traditional holiday almond cookies made in Spain – primarily in the southern part of the country where almonds are abundant.  The cookies can be purchased on-line at www.latienda.com.  Each box contains about 20 individually wrapped cookies and sells for $20 – $22 plus shipping.

Most people will question why the most dreaded holiday gift is included here as there are more jokes about fruitcake than any other holiday sweet. I used to wonder why America got stuck with the fruitcake when Italy got the panettone, Spain the polvorone or Pan de los Reyes (Bread of the Kings – a rich coffee cake ring that melts in your mouth and can only be purchased fresh to enjoy properly), and France has La Buche de Noel (the chocolate and chestnut cake shaped like a log).  As a young adult, I thought America got the short end of the stick on holiday desserts.

Fruitcake is one of those holiday treats that one may (or may not) acquire a taste for unless your first taste of a fruitcake is from a mix that King Arthur Flour of Norwich, Vermont (www.kingarthurflour.com)sells. 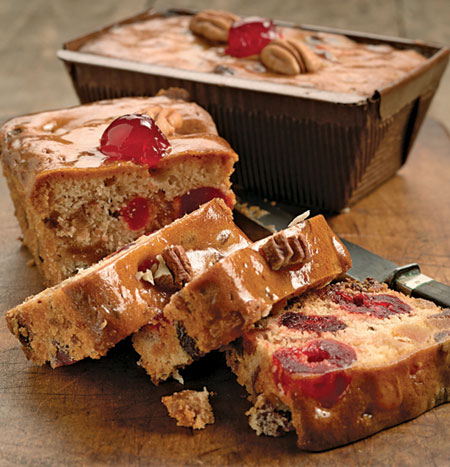 King Arthur Flour sells a basic mix for $5.95 that requires the addition of butter, eggs, light corn syrup, milk and the dried fruit and nuts of your choice to make two cakes. Or, a complete fruitcake mix is available that includes the dried fruit (apricot and pineapple chunks, golden raisins, cranberries, and dates) and candied cherries.

The complete kit sells for $19.95 and makes 2 loaves. If you’ve never tasted a good fruitcake, King Arthur Fruit Cake will change your mind – it did mine. The cake is moist, buttery, and delicious without the offensive bright green alien fruit.  And, when you finish that last bite, you won’t think that America got the short end of the stick on holiday desserts.

We’ve all seen those theme-inspired canisters overflowing with iridescent colored popcorn that tastes even worse than it looks.  Garrett’s Popcorn is different. Based in Chicago, Illinois, Garrett’s Popcorn has been making incredible tasting popcorn since 1949.  Try the cheddar cheese, almond caramelcrisp, or the pecan caramelcrisp: all three are positively addicting. Garrett Popcorn stores (9) are located throughout Chicago and even at O’Hare Airport but can also be purchased on-line in 1, 2, 3.5, or 6.5 gallon tins from $26 and up plus shipping. 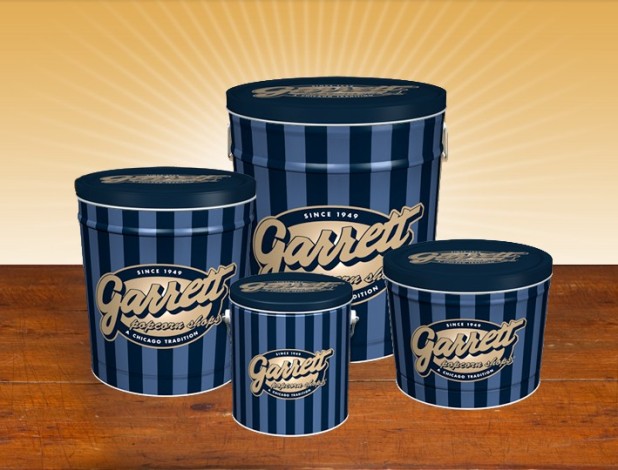