The Staff of Life: Poiláne 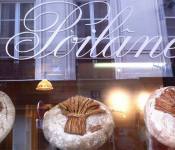 Everyone knows to visit the Louvre when in Paris, but not everyone knows to visit “Poiláne,” one of the oldest bread makers in the City of Light  for a taste of what real bread should taste like. My friend, Nancy told me I needed to visit this bakery so on a beautiful sunny 70 degree day in Paris, I set off on foot for the Left Bank with plans to enjoy a bread – the French sourdough loaf – that’s been made the same way for hundreds of years.

After thousands of steps (I didn’t really count), many traffic circles, a bridge, and consultations with my map that requires a magnifying glass  (I used to be able to read those little letters), I arrived at 49, Boulevard de Grenelle on the Left Bank to find the store closed for renovations until August 23rd. My heart sank. Not one to give up easy, I read the note on the door that referred customers to other locations in Paris. After consulting my map and calculating it would take me an hour to walk to the Poiláne in the 6éme, I found a taxi at an official blue-signed taxi stop (people are not supposed to hail taxis in Paris; instead taxis are obtained at taxi stops – dedicated spaces on the streets). Ten minutes later, my taxi driver dropped me at the top of a one-way street and somehow I understood him to say “the bakery is down the street on the right.”

Poiláne looks rather plain from the outside with muted wheat colored exterior walls. Large square windows filled with bags of butter cookies and free form apple tarts enclose a front door that opens into a very plain grey tiled floor. On the left side of the interior are rows and rows of large circular loaves of bread with a “P” imprinted on the top of each loaf, “petite pain” (small breads with raisins, walnuts, or plain), and breakfast breads (croissants, pain au chocolate and brioche).

On the right side, are rows of boxed butter cookies (the only type of cookie they sell), house jams, bread cookbooks, special knives, and wheat colored linen sacks. Poiláne is the simplest looking bakery I’ve ever been in yet I knew it was going to be a special place even before I tasted the wonderful sourdough bread, crunchy butter cookies, and buttery apple tarts. I was too late for the croissants, pain au chocolate and brioche which left me disappointed but the petite “pain” were a delicious alternative.

Sourdough Country Loaf: A round dark loaf of sourdough bread made from four ingredients: stone ground wheat flour, sourdough starter, water and sea salt. The “Poiláne Loaf” has a thick golden crust from being baked in a wood burning oven and weighs about 4 pounds.

Small Walnut Loaf: A smaller version of the sourdough country loaf with walnuts from the Périgord region of France. Each loaf weighs about 3/4 of a pound. This bread also comes in petite dinner size rolls that are chewy and nutty and delicious with a slice of cheese – preferably comté.

Rye Flour Loaf: A round 2-pound loaf made from stone ground wheat and rye flours, the Rye Flour Loaf has a dark outer crust and a rich heavy taste.

Rye and Raisin Bread: Rectangular in shape, this 1.3 pound loaf of bread is made from a wheat bread sourdough starter , rye flour, water and moist “currants” from Greece.

The bakery also makes small bread rolls (plain, with raisins, or with walnuts), a white loaf (surprisingly), pastries, croissants, pain au chocolate, brioche, and cookies called “punitions” which translates to “punishments” are small crunchy butter cookies made with flour, sugar, butter, and eggs. A wicker basket filled with samples is on the front counter. The apple tart – known as “tarte aux pommes” – is a buttery flakey crust filled with caramelized apple slices that melt in your mouth.

Poiláne was started by a baker from Normandy who came to Paris and opened the first Poiláne bread bakery in 1932 – 80 years ago. Determined to make a traditional sourdough loaf (instead of the popular baguette), Pierre Poiláne believed his signature 4-pound loaves had a future with Parisians who preferred a heartier full flavored bread with a longer shelf life (a Poiláne loaf lasts five days if stored properly).

The bakery flourished and by the 1970’s, Pierre’s son, Lionel took over the bread baking business. He and his wife, an architect, built a facility in the  1980’s with 24 wood burning ovens to create the same quality bread but in larger quantities.  In 2002, Lionel’s daughter, Apollolina took over Poiláne and continues the family tradition of making bread, what many people refer to as “the staff of life.“

There are three Poiláne locations in Paris:

There are also two locations in London (see the website below for addresses and hours). And, for those that cannot live without Poiláne bread, the company does ship overseas via federal express. See the company website listed below for more information.