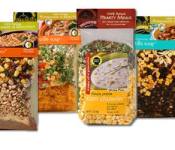 Now is the perfect time to make a big batch of soup but who wants to spend the afternoon searching cookbooks for the right recipe, shopping for the ingredients, chopping vegetables, and figuring out the right spice combination to make a flavorful pot of homemade soup? Frontier Soups offers an easy, healthy and delicious way to enjoy homemade hearty soups, chowders, and chills.

Made of dehydrated vegetables (non-GMO), dried beans, peas, and legumes, herbs and spices, Frontier Soups has no added salt, msg, preservatives, artificial flavors, or colors – just plain wholesome ingredients that can be combined with fresh vegetables, meat, poultry, water, broth, milk, or any non-dairy milk to make the ultimate comfort food on a crisp cool evening.

Frontier Soups makes 38 varieties of soups, gumbos, chowders, chills, stews and goulash – most named for regions of America. 29 of the varieties are soups:

There are four (4) varieties of chili:

Each Frontier Soup packet is clear allowing customers to see the ingredients. On the back of the packet is a list of the ingredients (impressive), the nutritional information (also impressive), and the recipe. Although the recipes call for specific ingredients including chicken, cream, milk, broth, and vegetables, I have successfully substituted other ingredients (almond milk for cream or milk or extra vegetables instead of meat, low sodium vegetable broth for chicken or beef broth) to create a stove top soup in less than 30 minutes for 4-6 people.

After I made the Illinois Prairie Corn Chowder, my husband put his spoon down, told me how delicious and flavorful the soup was and then suggested I can and sell the soup so I told him that Frontier Soups already figured that one out and it doesn’t come in a can but in a clear packet where all I had to add was vegetable broth, potatoes, corn, and milk.