“Ordinary Love and Good Will” 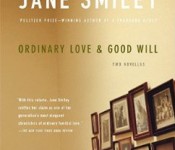 But it is not necessarily the ones you love the most that have the most effect on you.

Jane Smiley, Pulitzer prize-winning author of A Thousand Acres published Ordinary Love & Good Will – two short stories that explore the effects that people’s actions have on their children – in 1989. Although the stories are very different, the reader can’t help but see the long-lasting and indelible effects on the children of adults who don’t think about their behavior and consequences, who think of themselves first, who can’t control their urges, and who are often in denial. 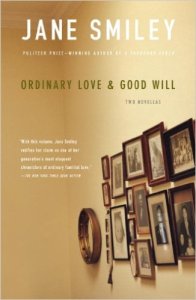 In Ordinary Love, the narrator is a 52-year old mother of five children, who by nature was an adventurer. At 14 years old she carried a list of places she had to see before she died and sought out her dreams. At the age of 32 her life changed forever when she confesses to her husband that she has been having an affair. He divorces her and takes their children (ages 5-10) overseas to live in England, which shakes her to her core.

Looking back over the 20 years since the divorce, Rachel is trying to come to terms with herself and how her actions impacted her children who are now grown, some with families of their own. In her mind, she thinks that “however my life looks to others, what it looks like to me is a child’s tower of blocks, built in ignorance and without a plan.” Her children both love and resent her for not being the mother they needed her to be.

In Good Will, the reader is introduced to Robert, Elizabeth and Thomas Miller. Nineteen years prior, Robert Miller was discharged from the army and set upon living a counterculture existence. He buys land, lives in a tent and eats by fireside until he meets Elizabeth and then sets out to build a home on the property that he farms. Their son, Thomas is born and the family lives a quiet, self-sufficient life on the farm, which requires a great deal of discipline, determination, and self-denial. When Thomas begins school, the outside world is let in which reeks havoc in a household that is tightly controlled by the self-described genius of the family: Robert.

Reminiscent in many ways of the classic book The Man Who Loved Children by Christine Stead (1940) – a chilling story of a man with visions and unmoving opinions, his marriage to a woman who is bitter, overworked and desperate, and his sadistic relationship with his children in a household where there is not enough money – Good Will is also the story of a man determined to isolate and maintain control to the detriment of his family.  Tragedy always strikes in these situations which leads to change or a steadfast commitment – but, not both.

Jane Smiley is a brilliant writer, one who creates characters in painstaking detail. The beauty of her characters is not so much whether they are good or bad people, but instead their ability to examine their lives, their decisions, and how these actions have affected the people closest to them.