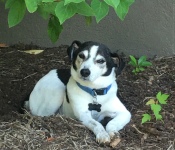 My sweet dog, Skeeter passed away this week. He was 18 years old and I was the lucky one who spent the last 6 years of his life with him.

In the Spring of 2015, I was running on a dirt road in central Iowa when a spry lean dog that looked like a Jack Russell ran out of a distant barn and followed me home. He seemed a bit detached but intent on hanging out with me so I gave him a bath (he was filthy), fed him, and then drove him back to the barn he came from. This back and forth went on for a few weeks.  I would go out for a run and Skeeter would appear and follow me home where we would hang out.  How he always heard me running down that dirt road I’ll never know.

One day, I saw a sign on the barn property that said “For Sale By Owner” so I called the number and spoke to a young woman (who I will refer to as “Miss Seattle”) who told me that she did, in fact, own the dog who had been following me home and that I could have him if I wanted him. Seems she met a guy in Las Vegas and moved to Seattle to live with the rodeo clown, taking her Sheltie but leaving Skeeter, the mixed breed (Jack Russell/Fox Terrier farm dog) behind. She told me her parents lived nearby and went to the barn once a week to fill up the trough with dog food.  I remember thinking “how does anyone abandon a 12 year old dog?” But, shaming her was not going to be productive; I wanted Skeeter so the best way to get him was to not say what I was thinking.

Through Miss Seattle and other local farmers who knew Skeeter, I learned he was first rescued as a puppy from a meth house in Iowa. A guy in a puffer jacket saw Skeeter quivering under a couch at a party so he stuffed the little guy in his jacket and took him home.  That was Skeeter’s first lucky break. He lived with his rescuer for a year but then the guy got a new job that required constant travel, so a young couple at a neighboring farm took Skeeter in. Miss Seattle was part of that young couple at the time, and she kept him for about 11 years before moving on.

Over the next few weeks I found out a lot about Skeeter. The beer-drinking guys at a neighboring farm didn’t like small dogs (they referred to Skeeter as “a little prick”) and threw him out of a moving truck one day, which is probably why one of his paws is crooked (it looks like it was broken and healed incorrectly) and why he was so afraid of men. They also took a permanent black magic marker and drew a mustache on his face,  which faded over time. 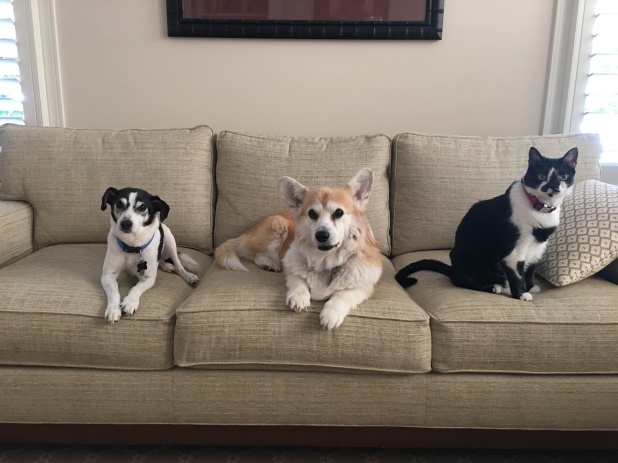 Despite all the abuse and trauma Skeeter had been through, he fit right into our family from day one. He accepted his position as #3 with Daisy, our corgi the alpha dog (who tragically passed away last year) followed by Luke, our cat as number 2.  He just wanted to be a part of the family and instinctively understood what he needed to do to make it work. Skeeter was a quick learner. If Daisy barked, Skeeter barked; if Daisy chased the kids down the dock, Skeeter followed. He was, in essence, the perfect foot soldier.

Right after he joined us in Iowa, a local farm dog attacked Skeeter and would have killed him. 16 pound Skeeter didn’t see it coming and realized there was no contest between a 65 pound dog and himself but he couldn’t get away, so I stepped between the dogs.  In trying to save Skeeter, I was thrown to the ground and broke my wrist but was able to get Skeeter away from the other dog, and inside the house.  We realized that Skeeter survived through the years because he had luck on his side, great instincts (he knew when to back down and how to seize an opportunity), and good genes.

When we first took took him to the vet, Skeeter was tested for heartworm, which surprisingly he didn’t have. He did however have a lot of infected bad teeth so the vet operated on him the next day and extracted 8 rotten teeth (he had 5 more removed two years later) and neutered him.

I picked him up from the vet who advised me to take Skeeter for short walks on the farm (dirt) roads for the next few days (because of his stitches). Later that day, I took Skeeter and my corgi, Daisy for a walk and as we were passing a lush forested area that served as a border between farms, Skeeter took off running like a bat out of hell. Worried that he would open his stitches, I ran after him in my shorts and farm boots.  I found out later he was chasing a raccoon but only heard the snarls and growls of a wild animal at first.

Because of the overgrowth, I didn’t see a barbed wire fence in front of me and went flying over it, cutting my thighs and landing in a hole of gunky black water filled with ticks and leaches. It was disgusting. I got up and followed the animal screams and barking and found the raccoon cornered by Skeeter who seemed pretty proud of himself. I lifted Skeeter up and remember saying “little guy…you are 12 years old (which is about 70 in human years); its time to chill out,”  but Skeeter wasn’t ready to chill out; at 12 he was still in his prime chasing years.

We made it back to the dirt road where Daisy was waiting for us (she knew  better than to follow us in), and then walked back to the farmhouse where I cleaned up and then googled “Jack Russell” and “Fox Terrier” so I could learn about this energetic breed. Skeeter may have technically been a senior, but it was in his DNA to give chase to raccoons, squirrels,  rabbits (he once caught a rabbit in his  mouth, which I made him let go). 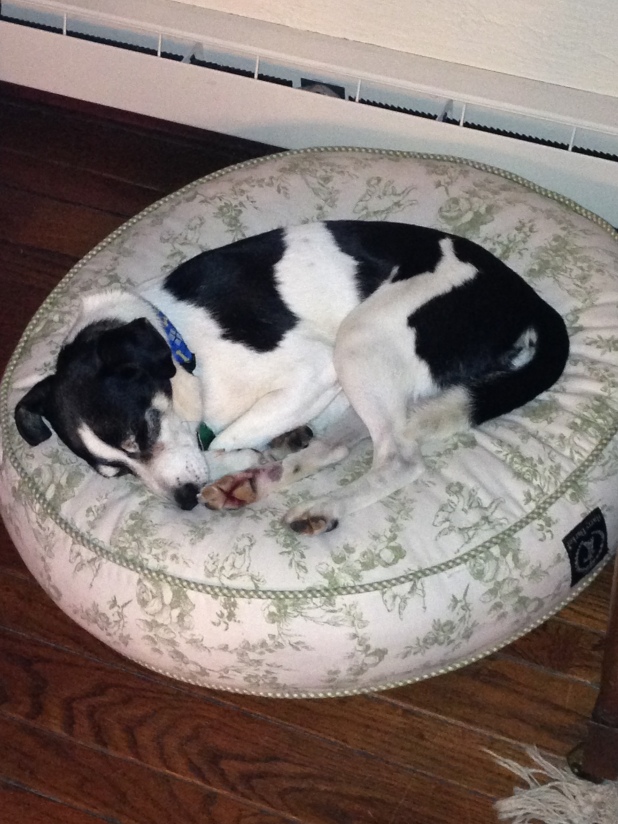 Initially, Skeeter would readily walk up to any woman but would shake and quiver if a man approached him. We knew his fear of men came from the abuse he took through the years. How do you tell a dog that he will never be hit, thrown or abused again? By speaking softly, giving him lots of love, and doing things his way.

Within 6 months, he started to let his guard down. Eventually, Skeeter would run to my husband and wag his tail, dance on two legs like a circus dog when he was excited, and play with toys. I don’t think Skeeter ever had toys so when he took to a stuffed rat (that the cat played with), tossing it in the air and then catching it, all we could do was laugh…and buy him more stuffed rats to make up for the years he didn’t have them.

We marveled at his ability to trust again, to forgive humans, and believe that he was truly deserving of love. We reassured him that he found his forever home but knew deep down he probably didn’t know what a forever home was because he had always been neglected, abused or abandoned.  So, he never stopped following us. He was afraid of losing us. He didn’t walk with a leash (we tried but he would just freeze so we didn’t want to push it because we knew how hard it would be to leash him after 12 years of freedom) but he always stayed by our side.  When people yelled at me for not having him on a leash, I usually moved on because I didn’t want to explain myself, or that Skeeter had more to fear than the self-appointed fervent leash martinet. 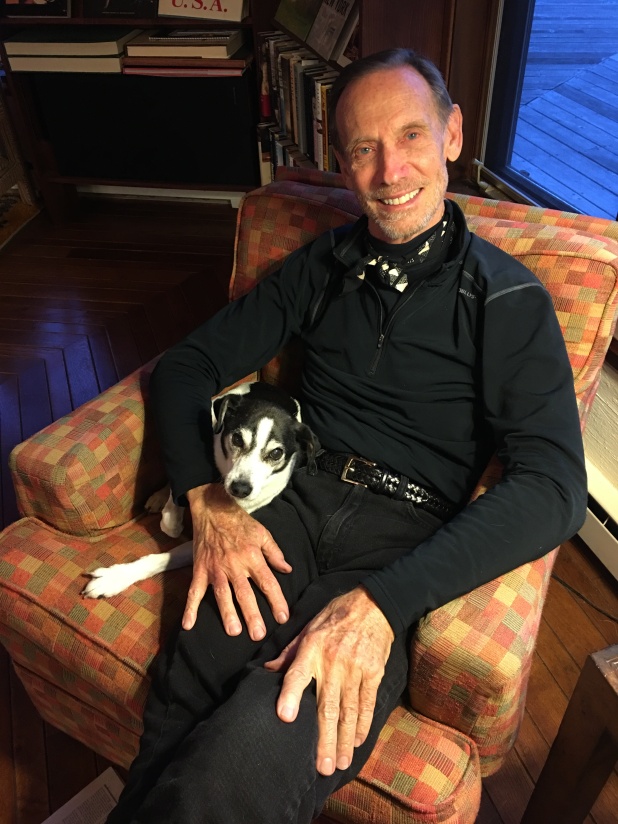 Skeeter loved to sit on our lap or next to us on a soft, warm blanket. There was never enough affection for him and we would casually comment that he was probably making up for the 12 years he didn’t get the love he needed. Skeeter also had his isms. He didn’t like having a collar on his neck, eating or drinking out of a bowl (he preferred his food on the floor and water from streams, lakes, and puddles), or being in a room with a closed door. He also liked to wake me up at about 3 am to go outside to relieve himself. We took all of these issues in stride and did our best to accommodate him. We often kept his collar off in the house, took him for walks twice a day to a stream to let him drink to his heart’s content, served his food on the floor, and had him sleep in our room so I could get up, open the front door, let him run out to pee, and then let him back in. 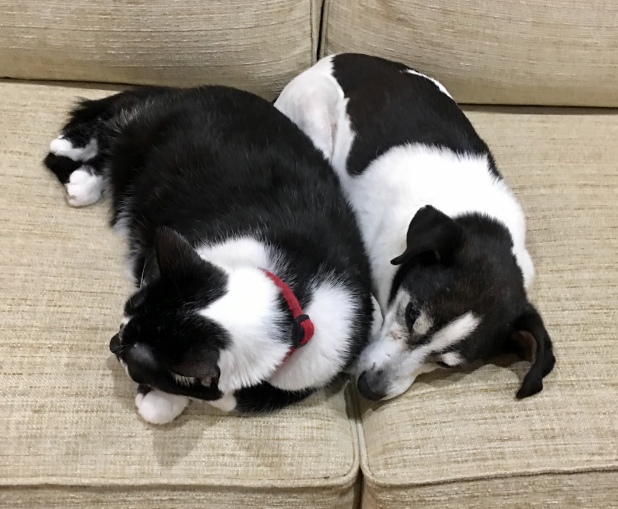 At 16 years old, Skeeter was diagnosed with kidney disease – a chronic disease that couldn’t be reversed – so we tried to always keep him hydrated. We had a few close calls but he always pulled through, usually with the help of a hydration pack and over the last year, syringes of water gently squirted into his mouth several times a day to give his kidneys the water they desperately needed to function properly.

At 17, Skeeter slowed down considerably and stopped running like the little stallion he was, started sleeping more, but still did not want to be left home. I tried putting him in a stroller but he wasn’t having it. Acupuncture and medications  helped with  arthritic  pain  along  with  antibiotics  to  treat  infections in the few teeth he had left. But then, the unthinkable became possible. Skeeter bounced back and wanted to go for walks in the dog stroller where he enjoyed the scenery and sunny days and often walked the last mile. 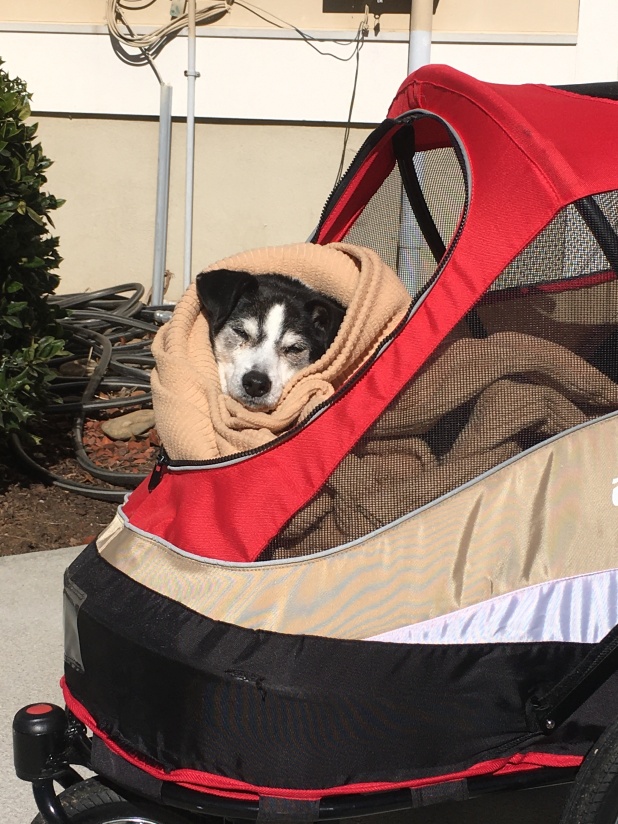 This past winter, he especially loved wearing a fleece dog jacket and being wrapped in a blanket snuggled in the stroller. His reluctance and then acceptance of a different way to take walks seemed like a metaphor of how we all go through life and adapt to limitations we once found unacceptable. 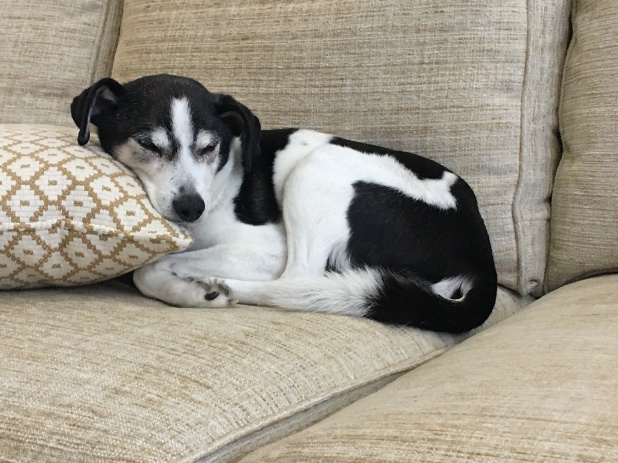 Of all the things that Skeeter was and wasn’t, his ability to forgive, love, and trust again after so many disappointments was remarkable.  I had never known a dog to seem so damaged, scarred, and afraid but willing to try again. He never gave up on humans and he learned to rely on us in old age. We ultimately were the lucky ones. He chose me that first day he ran out of the barn and followed me home. The gift was ultimately mine though because Skeeter showed me that no matter what happened in the past, he found a way to move forward. And, that’s a powerful lesson.  RIP my sweet Skeeter boy. We loved you.