La Antigua, Guatemala is located in southern Guatemala about 40 kilometers (24 miles) southwest of Guatemala City although most people refer to La Antigua as Antigua and the location as being in the central highlands of the country because of the mountainous region and vegetation. La Antigua, Guatemala means “the old Guatemala” and was established as the third capital of the country in the middle of the 16th century by the Spanish conquistadors after two other sites were abandoned. In the 18th century after several earthquakes, the capital was moved to the present site – Guatemala City – although Antigua was never abandoned completely by its citizens.

Today, Antigua is primarily a destination for tourists and for those interested in attending one of the dozens of Spanish schools.  A colonial city with streets made of stone, Antigua’s architecture is intriguing with the buildings built out to the sidewalks and streets. Behind the unassuming walls are spectacular homes, hotels, schools, and businesses with lush gardens in the central part of the open roof buildings.  The rooms are built around the gardens for an indoor/outdoor living experience, all made possible because of the two season (wet and dry) mild climate where temperatures range between 55-75 degrees.

In planning a trip to Antigua, fly into Guatemala City.  Make arrangements with the hotel for transportation from the airport to Antigua. Upon exiting the baggage claim and airport, the driver should be right outside the exit doors behind a metal barrier, holding a card that has your family name printed on it.  Do not exit into the crowds of people before locating your driver as your luggage can easily be separated from your group. Once you locate your driver, he will help you with the luggage and get your group to the van (the typical vehicle for transporting tourists) which will be parked across the street in the parking garage. 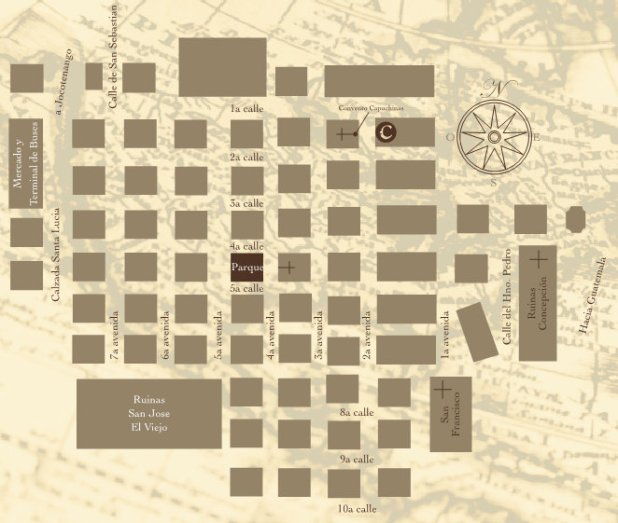 The downtown part of Antigua is approximately ten square blocks that are very easy to navigate by foot. Wear sensible shoes as the sidewalks can be uneven and cracked.

Upon settling into the hotel, consider the following:
Walking Tour of Antigua

Elizabeth Bell is probably the most knowledgeable and well-known tour guide in Antigua. Although she looks like she just stepped out of Westport, Connecticut with her crisp white blouse, khakis and brown bob, Elizabeth Bell navigates Antigua like a seasoned pro. Her company, Antigua Tours was established in 1992 and she offers a variety of tours and excursions. 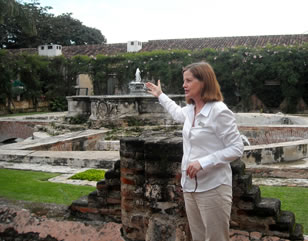 A guided Antigua Walking Cultural Tour by Elizabeth Bell is offered four days a week (Tuesday, Wednesday, Friday, and Saturday) from 9:30 – 12:30 for $20 (includes tour, entrance fees to sites, and refreshments).  On Monday and Thursday, the same tour with a different guide is offered from 2:00 – 5:00. In addition, tours to a local village, coffee finca (farm), a canopy adventure park, and a tour up Picaya (an active volcano) are offered. Refer to the website listed below or call the toll-free number to speak to a representative (who is fluent in English).

Antigua Tours (Parque Central Office which is inside the Casa del Conde building on the west side of the park next to the restaurant, Café Condesas)
5a Avenida Norte, No 4
La Antigua Guatemala
00 502 7 832 00 53

Arco de Santa Catalina
The Arco de Santa Catalina is known as “El Arco” or “The Arch” around Antigua. Located on the north side of town approximately three blocks from Parque Central, the Arch is one of the most photographed sites in Antigua. Built in the early 17th century as a way for nuns to cross from one side to the other without interacting with the public, the Arch has been damaged by earthquakes and rebuilt several times. The clock was added in the 19th century and replaced through the years. 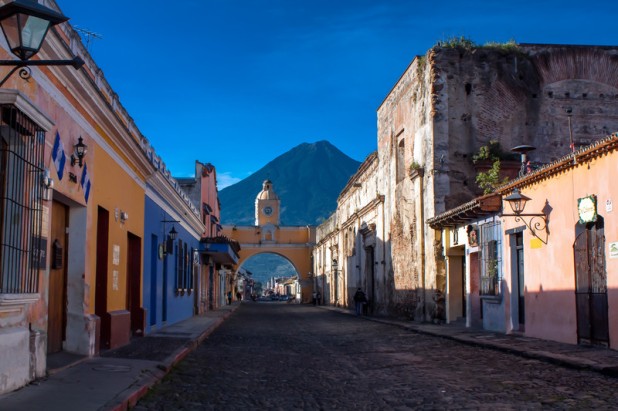 La Merced
La Merced Church is formally known as “Iglesia y Convento de Nuestra Señora de la Merced” but everyone refers to the church as “La Merced.”  Originally built in the 16th century and then rebuilt in the 17th century after an earthquake destroyed the original building, La Merced looks like a big yellow and white wedding cake, according to my daughter.

The church as been fully restored and tourists are free to enter.  Inside there are ruins of a monastery which have not been restored.  Located just past the Arch, the address of La Merced is 1 Calle Poniente and 6 Avenida Norte. 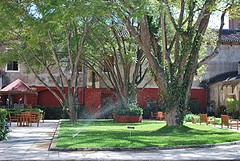 The CFCE Antigua is the “Centro de Formación de la Cooperación Española en Antigua, Guatemala” which means the “Center of Training/Education and Spanish Cooperation in Antigua, Guatemala.” The center coordinates and provides a wide range of activities:  movies, exhibits, shows, concerts, and programs for children.  The CFCE also has a library and seems to operate as a Spanish Cultural Center.

The facilities are located two blocks from the Parque Central and take up a very large block of space with multiple buildings and gardens. In addition, there is a restaurant inside. Walk through the beautifully restored buildings and even if your understanding of Spanish is limited, the exhibit (currently, a photography exhibit) is worth viewing. The building signage is not good and the viewing of exhibits may require backtracking (instead of exiting) but the staff are very helpful in pointing visitors in the right direction.

Hours are not posted so best to call or have the concierge at the hotel call.

Catedral de San José
The Catedral de San José is known in English as “The Cathedral of Saint Joseph” and is referred to as “The Cathedral” in Antigua.  Located on the eastern side of the Parque Central, the Cathedral takes up most of the block.  Originally built in the mid-16th century but damaged by an earthquake, the cathedral was rebuilt in the late 17th century. Damaged again in the 18th and subsequent centuries by earthquakes, the cathedral has been restored although there always seems to be restoration going on.  Most recently, the scaffolding on the exterior came off for the first time that I can remember in two decades but there are still ruins inside the cathedral.

There are several other ruins and small museums in Antigua which can be discovered through a walking tour or by consulting with the Antigua Tours office listed above.