Bruschetta is one of those hors d’oeuvres that is loved by many but made by few because there are three aspects to this tasty tidbit which require planning and time:

END_OF_DOCUMENT_TOKEN_TO_BE_REPLACED 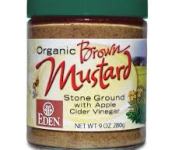 Mustard is one of those foods that people tend to have strong opinions about. Just ask Malcolm Gladwell who wrote The Ketchup Conundrum in the September 6, 2004 issue of The New Yorker. In the article, Gladwell notes that while ketchup has basically stayed the same through the years, mustard has undergone a revolution of sorts and evolved into the most segmented condiment on the market.

She couldn’t see that no one else was perfect either, and that so much of love was the work of it.

Lucy Grealy (1963-2002) was 39 years old when she died of a heroin overdose in a friend’s apartment in New York City a few days before Christmas. Sad, lonely, and depressed, Grealy endured three decades of both physical and emotional pain before taking her life. A talented poet and writer, Grealy’s most recognized piece of work was “Autobiography of a Face” (1994) which recounted her experience with cancer of the jaw and the resulting disfigurement caused by dozens of surgical procedures both intended to save her life and reconstruct her face. END_OF_DOCUMENT_TOKEN_TO_BE_REPLACED 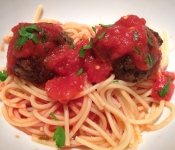 Spaghetti and Meatballs is comfort food at its best but when meat is no longer on the menu, the challenge is how to make meatballs without meat, which almost sounds like an oxymoron. Except that mushrooms are often described as meaty which makes them perfect as a substitute in recipes calling for ground meat.

Mushroom meatballs are easy to put together and cook (they don’t fall apart) but the best part is the taste and texture. Crusty on the outside, moist on the inside, mushroom meatballs are so delicious that even non-vegetarians and non-vegans love them (my carnivore husband actually requests these). END_OF_DOCUMENT_TOKEN_TO_BE_REPLACED 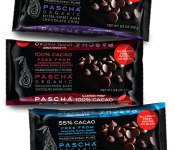 Friends are the chocolate chips in the cookie of life.

We never outgrow chocolate chips but as we grow older, we realize there are differences in chocolate chips, just as there are differences in the friendships we’ve cultivated through the years. Some have an artificialness while others are as pure as the cacao bean itself. It’s the real ones – the truly scrumptious ones – we want to treasure. END_OF_DOCUMENT_TOKEN_TO_BE_REPLACED

Indulge in the savory flavors of the Greek Islands….

Mediterranean Crackers are delicious crisp crackers made with extra virgin olive oil and the freshest ingredients by bakers in Greece. Top with your favorite spread, nut butter or simply enjoy these flavorful crackers straight from the box. With four flavors to choose from – Original Sea Salt, Leek & Onion, Roasted Tomato and Basil, and Feta & Oregano, Mediterranean Crackers bring the authentic flavors of Greece to your table. END_OF_DOCUMENT_TOKEN_TO_BE_REPLACED

Brotherhood is exclusive, not universal.

35 years ago, men rarely sought out each other’s company outside of a sporting event, a bar, or a bachelor party.  While women were leaning on each other and seeking camaraderie in Mommy & Me events, book clubs, and aerobic classes, men went to work, fulfilled family obligations, and briefly escaped to society sanctioned events which did not generally include meeting at one of their homes for a men’s club get together.  So, when a group of seven men – a retired professional basketball player, a tax accountant, a lawyer, two psychotherapists, and two college professors – come together to form a men’s club – “a regular social possibility outside of our jobs and marriages,” there is curiosity and reluctance to take a road less traveled, as depicted in the fictional novel, The Men’s Club. END_OF_DOCUMENT_TOKEN_TO_BE_REPLACED

Meru is a documentary film (2015) that chronicles the journey of three of the world’s best climbers – Conrad Anker, Jimmy Chin, and Renan Ozturk – in their pursuit of being the first climbers to ascend the Shark’s Fin, a 4,000 foot wall on the Meru Peak (see center of the photo below) in the Himalayas on the north side of India whose altitude is 6,660 meters. END_OF_DOCUMENT_TOKEN_TO_BE_REPLACED

I’d be willing to wager that no one has won an argument on Facebook. We have the Right to Lifers and Pro Choice defenders at each other’s throats with neither side giving an inch while the NRA and the citizens who support various types of gun control villainize each other. The animal rights activists are exposing the livestock industry for its cruel practices and trying to shame those who don’t care or think the industry’s practices are best ignored.  And, the political supporters of both the Republican and Democratic parties polarize and tear each other apart on Facebook. Too many people are spewing vitriol at one another in a ping-pong game of words in which no one ever wins. END_OF_DOCUMENT_TOKEN_TO_BE_REPLACED