Where Does $100 to Rotary International Go?

There are an estimated 32,000 Rotary Clubs worldwide that are grouped into 529 districts (an average of 60 clubs per district) in 34 zones (an average of 16 districts in each zone). Each district (529 of them) has a governor.  There are 17 zone directors who each head 2 zones. The governors and directors are  nominated and elected positions. In other words:

END_OF_DOCUMENT_TOKEN_TO_BE_REPLACED

Executive Compensation at the Rotary Foundation

The Rotary Foundation (RF) is a 501 (c) (3) based in Evanston, Illinois (at the same address as Rotary International (RI)). Although the organizations are separate (RI is a 501 (c) (4)), they are related. In the most simplistic terms, RI overseas the 32,000 Rotary Clubs across the world while RF awards grants and manages a very large endowment (nearly $1.1 billion). The executive employees appear to work with both organizations.

Staffed with 281 employees who were compensated $27.8 million (an average compensation of $99,000), RF provided more than $100,000 in compensation to 45 employees.  The most highly compensated individuals were: END_OF_DOCUMENT_TOKEN_TO_BE_REPLACED

Rotary International (RI) is a 501 (c) (4) – a social welfare organization that oversees 32,000 Rotary International Club organizations – based in Evanston, Illinois. Governed by a 20-member board (the president, president-elect, general secretary who is also the CEO, and 17 Rotary Zone Directors), Rotary International reported having 330 employees who were compensated $34.3 million which equates to an average compensation of $104,000. However, only 60 individuals received more than $100,000 in compensation with the 14 most highly compensated individuals listed below: END_OF_DOCUMENT_TOKEN_TO_BE_REPLACED

Most people think of the Rotary as the local business group that invites business leaders and citizens to join the club (members have to be invited by a current Rotarian and cannot join without an invitation) and meets once a week for breakfast, lunch, or dinner to develop friendships, listen to speakers, and organize community assistance programs conducted throughout the year, but Rotary is more complicated than that. END_OF_DOCUMENT_TOKEN_TO_BE_REPLACED 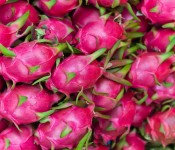 Is There Anything More Beautiful Than A Dragon Fruit?

To me, a Pitaya – also known as a Dragon Fruit – looks like a fruit worthy of the fanciest fruit salad. With a fluorescent magenta and green outer skin covering a slightly sweet juicy interior that tastes like a melon, the Dragon Fruit is both beautiful to look at and scrumptious to eat.

In fact, it’s so beautiful to look at, that I often use a few as a center piece on the table until ripe (note:  as the fruit ripens, the pink color gets brighter and brighter). Then, I place the fruit in the refrigerator to chill for a few hours or overnight because the flavor is best when chilled. END_OF_DOCUMENT_TOKEN_TO_BE_REPLACED

Where Does $100 to the Veterans Support Foundation Go?

The Veterans Support Foundation (VSF) is a 501 (c) (3) operating out of the same office as Vietnam Veterans of America (also a 501 (c) (3) that is a “related tax-exempt organization”) in Silver Spring, Maryland.

VSF has two functions:  provide funds (grants) to other non-profit organizations supporting “community-based veteran-related projects; and, manage four residential properties (3 which they own and operate in concert with the VA) that provide housing for up to 30 veterans.  Unfortunately less than $8 out of every $100 was allocated to grants and only $21 out of every $100 was used to support the organization’s other mission. $67 out of every $100 was given to professional fundraisers. END_OF_DOCUMENT_TOKEN_TO_BE_REPLACED

Where Does $100 to Challenge Aspen Go?

Challenge Aspen is a 501 (c)(3) based in Snowmass, Colorado. Established in 1995 by Houston Cowan (who retired May 31, 2017) and Amanda Boxtel, Challenge Aspen is a non-profit focused on people with cognitive and physical disabilities to have access to a wide variety of recreational and cultural activities through their “strong working relationship with Aspen Skiing Company, that includes access to the area’s four ski mountains, a dedicated staff, and a committed volunteer force.”

According to the IRS Form 990’s over the past three years (ending May 31st of 2017, 2016, and 2015), Challenge Aspen has been reporting total revenue of about $3.5 million annually with about $1.5 million coming from non-cash donations described as lift tickets and ski lessons. On the expense side, Challenge Aspen has been expensing the exact same amount as the non-cash donation for ski company instructors. What this appears to mean is that the organization donating the lift ticket and ski lessons (appears to be Aspen Ski Company) gets a charitable donation for making the donation to Challenge Aspen and then Challenge Aspen turns around and spends the exact same amount on Aspen Ski Company instructors. END_OF_DOCUMENT_TOKEN_TO_BE_REPLACED

Where Does $100 to the American Friends of the Hebrew University Go?

The university has about 23,500 students at 6 campuses.

Over the past three years, AFHU reported the following information on the IRS Form 990’s: END_OF_DOCUMENT_TOKEN_TO_BE_REPLACED

Executive Compensation at the American Friends of the Hebrew University

Where Does $100 to the Cancer Alliance of Help and Hope Go?

The Cancer Alliance of Help and Hope (CAHH) is a 501 (c)(3) established in 2003 in Palm Beach County to primarily provide emergency financial assistance to help cancer patients and their families.  They basically help people meet basic non-medical needs, such as rent, mortgage, and/or car payments, car insurance, health insurance, and utilities (in an amount of up $10,000 per family).

Modeled after a non-profit established in Naples, Florida, CAHH has been a relatively small (and still is) organization that brought in a new Executive Director (Stanton Collemer) in 2016 to grow the organization. Operating out of an office in Palm Beach, the organization appears to be focused on raising funds in a town known for its fundraising and charity support. END_OF_DOCUMENT_TOKEN_TO_BE_REPLACED