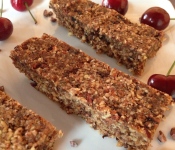 Making your own energy bars is simple and easy (and not nearly as difficult as it may seem) with the benefits (flavor, taste, freshness) greatly outweighing the convenience of buying them. All you need is a food processor, parchment paper, a pan (a 7 x 10 rectangle or 8 x 8 square or 9 x 9 square) and fresh wholesome ingredients that include nuts, seeds, fresh fruit, dried fruit, and a few other special ingredients from your pantry. END_OF_DOCUMENT_TOKEN_TO_BE_REPLACED 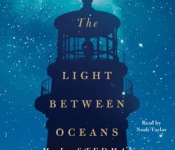 The Light Between Oceans

The oceans never stop. They know no beginning or end. The wind never finishes. Sometimes it disappears, but only to gather momentum from somewhere else, returning to fling itself at the island, to make a point….

Using the two oceans – the Indian Ocean and the Great Southern Ocean – as a metaphor for two families whose lives blend and collide, M.L. Stedman tells the story of the Sherbourne’s and the Roennfeldt’s in a book entitled The Light Between Oceans.

Published in 2012, the 340 page novel is divided into three parts (Book 1, Book 2, and Book 3 ) and 37 chapters. A New York Times bestseller, The Light Between Oceans is also being made into a film that will be released in September, 2016. END_OF_DOCUMENT_TOKEN_TO_BE_REPLACED 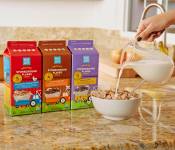 Back To The Roots Organic Stoneground Flakes

Food should come from the kitchen, not a lab.

Back To The Roots is probably the only company that tells the consumer exactly what’s in their cereal, where the ingredients are grown and harvested,how its made and how you can make it. Yep, they give you the recipe and complete instructions on how to make their cereal at home. So, if you’re feeling the inner Martha Stewart and want to get adventurous in the kitchen, knock yourself out by making stoneground flakes cereal in the comfort of your home. END_OF_DOCUMENT_TOKEN_TO_BE_REPLACED 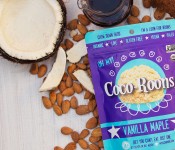 Coco-Roons are what every sweet tooth has been waiting for.

Classics are classics but sometimes things need to be shaken up a bit and that’s just what Wonderfully Raw of Watsonville, California did to the coconut macaroon – a cookie that generally falls into two categories: plain or dipped in chocolate. Not anymore. Drum roll please. END_OF_DOCUMENT_TOKEN_TO_BE_REPLACED 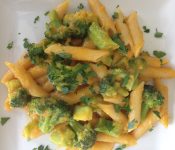 If you’re longing for creamy pasta without the dairy, then Pasta with Roasted Vegetable Sauce and Broccoli is just the dish. Roasted butternut squash, sweet potatoes, onions and corn mixed with low-sodium vegetable broth and unsweetened cashew milk form the foundation of a thick sauce that goes perfectly with pasta and steamed broccoli. END_OF_DOCUMENT_TOKEN_TO_BE_REPLACED 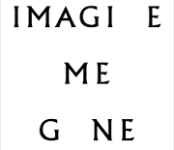 So like a cripple I long for what others don’t notice they have:  ordinary meaning.

Imagine Me Gone is the very emotional story of a family living with mental illness during the later half of the 20th century (1960’s, 70’s. 80’s, and 90’s). The story begins in 1962 in London. A young American woman named Margaret is working at a library in the suburbs when she meets John – “a showman when he’s on, capable of great largesse” – at a a party. Eighteen months later, Margaret and John become engaged but after Margaret returns from visiting her family in Massachusetts over the holidays, she wonders whether they will marry after she learns that John is in a psychiatric hospital with what is described as an “imbalance.” Unsure of what this really means, Margaret remains committed to John and helps him return to his former self although in retrospect years later she realizes “we live among the dead until we join them.” END_OF_DOCUMENT_TOKEN_TO_BE_REPLACED 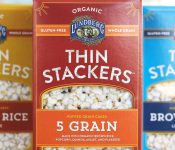 Thin Stackers are light and crunchy thin rice cakes made out of organic ingredients – brown rice, quinoa, millet, flax seed, popcorn, and red rice – that scream flavor in every bite. It’s not any rice cake that can make this claim because most rice cakes have little or no flavor. But, not Thin Stackers: gluten-free puffed grain cakes whose unusual shape (a square) make for multiple uses. END_OF_DOCUMENT_TOKEN_TO_BE_REPLACED 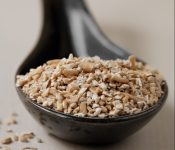 Agricultural products depend on soil, seed, farming practices, preparation and enjoying the final product so it goes beyond saying that not all oats are created equal. In fact, it’s more accurate to say that oats – like many other products (think grocery store tomatoes versus Farmhouse tomatoes) – vary tremendously in flavor and it’s not because some are instant, flakes, or steel-cut but rather if the oat has been bred for flavor (as opposed to yield, visual appeal, shelf life, disease resistance, or transport) and grown in soil that uses crop rotation to maximize the nutrients and thus the flavor of the oat. Healthy, nutrient rich soil makes great tasting food. END_OF_DOCUMENT_TOKEN_TO_BE_REPLACED 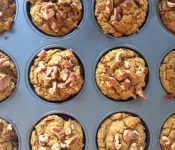 Pumpkin is often associated with the Autumn leaves and Thanksgiving but there is no reason we shouldn’t enjoy this tasty and nutritious fruit (yes, pumpkin is a fruit and part of the squash family) all year-round. Shelf-stable puree pumpkin is available in cans and boxes in most supermarkets so keep a few in the pantry to make these moist, delicious, dairy and gluten-free muffins any time of the year. END_OF_DOCUMENT_TOKEN_TO_BE_REPLACED 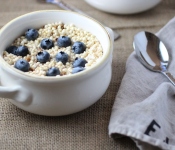