At my core, I am a social liberal and fiscal conservative which makes the choice of whom to vote for very difficult. Always reminding myself not to be a single issue voter, I compiled a short list of issues that are important to me and then thought about which candidate would be a stronger supporter of each issue (in parenthesis): END_OF_DOCUMENT_TOKEN_TO_BE_REPLACED

Ten years ago, Eric Haeberli and Phineas Hoang used the Blenheim apricots from one tree in their yard (which used to be part of an apricot orchard) to make apricot jam by combining the freshly picked fruit, sugar, and spices (the blend of which is a secret).  The result was one of the most delicious jams ever created:  Blenheim Apricot Jam.  Five years later in 2007, Eric and Phineas decided to turn a five-year hobby into a business called “We Love Jam” and now sell their jam to the public in a jar simply labeled “JAM“…but in limited quantities because the Blenheim apricots are only harvested in late June and July – and the jam starts shipping in August. END_OF_DOCUMENT_TOKEN_TO_BE_REPLACED

My friend Dania came to visit us this summer and offered to make a vegan lasagna from the the book “Forks Over Knives.”     Of course, I accepted the offer even after she told me it would take four hours to make (because I wasn’t going to have to do it by myself). We worked together to make the lasagna and cut the time down to about an hour and a half but there were two of us – still too much time to spend on one dish for me. The lasagna was really good but we both thought improvements could be made based on our taste preferences. END_OF_DOCUMENT_TOKEN_TO_BE_REPLACED

During the summer, ice cream is a regular part of our daily diet with the choices limited to the local soft serve or store-bought hard variety. A few weeks ago, my daughter asked if we could order a healthy alternative – frozen yogurt – since the selection is limited in this remote area of upstate New York.  We went on-line and came upon Jeni’s Splendid Ice Cream and noticed she makes 5 flavors of frozen yogurt (which varies depending on the time of year) so we ordered all five flavors. Three days later, the five pints of frozen yogurt: Black Currant, Grapefruit, Lime and Blueberries, Lime Cardamom, and Mango Lassi – were delivered (via UPS ground service) to our door frozen solid on dry ice. END_OF_DOCUMENT_TOKEN_TO_BE_REPLACED

Muesli Fusion is based out of Rochester, New York and is the creator of seven muesli cereals made from all natural, raw and organic ingredients including grains, nuts, dried fruits, and seeds. Each blend of muesli is designed for a specific target audience or for those that want a different cereal each day of the week:  low-fat, protein packed, no nuts or seeds, gluten-free, rich in omega-3 fatty acids, high fiber, and sweetened with nothing but dried fruit (five out of the seven blends with the remaining two containing cocoa nibs or cinnamon chips). END_OF_DOCUMENT_TOKEN_TO_BE_REPLACED

A hazelnut is also known as a filbert nut and is most often associated with desserts or chocolate (think Nutella or praline). But the hazelnut is also delicious roasted and salted and can be used to make hazelnut butter, an alternative to peanut butter.  In Europe, hazelnuts are used to make a paste for pastries or chopped and then sprinkled on the sides of cakes or tortes. Frangelico, a vodka-based liquor is flavored with hazelnuts and hazelnut oil is gaining popularity as a cooking oil. END_OF_DOCUMENT_TOKEN_TO_BE_REPLACED

In 2003, Daniel Lubetzky, an entrepreneur launched KIND – a healthy snack company based on two principles: the word “and” meaning that his snacks would be tasty and healthy; and “kindness” with reference to treating your body, taste buds, and the world with unexpected kindness.  Most health bars lack taste and texture which I can attest to as I’ve tried just about every bar on the market and most were one-time purchases so as the years passed, my expectations for any kind of healthy snack bar that tasted exceptional diminished until I discovered KIND bars.  Not only are KIND bars convenient and wholesome, but they are healthy and tasty – an unexpected coupling as these two descriptions don’t often go together. The only caveat:  the consumer needs to be a nut-lover to enjoy these bars because the main ingredient of each variety bar is some type of nut. Crunchy, chewy, and delicious accurately describe KIND bars. END_OF_DOCUMENT_TOKEN_TO_BE_REPLACED 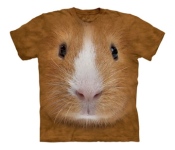 T-shirts have never taken up much space in my closet, despite its immense popularity in this country.  In fact, I can count on one hand how many t-shirts I own. It’s not that I have a blanket aversion to t-shirts (although my daughter claims I do), it’s just so rare that I find a t-shirt that I like – the exception being the Big Face t-shirt collection by The Mountain. The Big Face t-shirt collection is best described as three-dimensional animal faces on a t-shirt that look so real, they appear to pop out at anyone that looks at them. So, when I saw the guinea pig t-shirt, I had to have it since I am somewhat known as a guinea pig when it comes to tasting food. END_OF_DOCUMENT_TOKEN_TO_BE_REPLACED 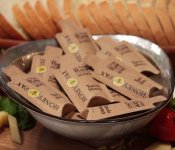 Honey Pax…It’s All About The Honey

For those who want delicious raw honey that won’t crystallize, is deliverable in an easy portable packet, and sourced directly from the beekeepers, look no further than Honey Pax – the brainchild of brother and sister team, Jason and Julie who grew up snacking on Tupelo Honey, a raw honey made by bees whose hives are located near the White Tupelo tree.  Known for its fragrant white flowers that produce a nectar the bees love to feast on, the Tupelo Tree thrives in northwest Florida. END_OF_DOCUMENT_TOKEN_TO_BE_REPLACED 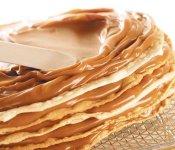 Dulce de Leche or Milk Caramel is made by slowly cooking fresh milk and sugar until the mixture thickens into a luscious creamy caramel sauce. Popular in Latin America and in Spain, my first taste of Dulce de Leche was in Madrid a decade ago when it was served poured over vanilla ice cream.

Thicker than a sauce, Dulce de Leche is more like a cooled melted caramel – thick, rich and not unlike the caramel that sticks to a spoon when making caramel apples. Although Dulce de Leche cannot be used to make caramel apples (because it doesn’t harden when cooled), the sauce can be spooned over ice cream, yogurt, cake, waffles, crepes, biscuits, toast, and even used as a layer between sweet crisp breads known as “tortas” (as pictured above). Some fans have been known to stick a spoon in the jar and enjoy Dulce de Leche plain – it’s that good. END_OF_DOCUMENT_TOKEN_TO_BE_REPLACED