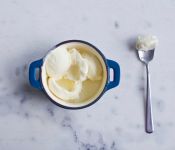 During the summer, ice cream is a regular part of our daily diet with the choices limited to the local soft serve or store-bought hard variety. A few weeks ago, my daughter asked if we could order a healthy alternative – frozen yogurt – since the selection is limited in this remote area of upstate New York.  We went on-line and came upon Jeni’s Splendid Ice Cream and noticed she makes 5 flavors of frozen yogurt (which varies depending on the time of year) so we ordered all five flavors. Three days later, the five pints of frozen yogurt: Black Currant, Grapefruit, Lime and Blueberries, Lime Cardamom, and Mango Lassi – were delivered (via UPS ground service) to our door frozen solid on dry ice.

We had a house full of guests and the group was gathered around a big round table playing Jenga when we decided to have a snack and what started as a scoop of frozen yogurt turned into a round robin tasting of frozen yogurt. At first we placed a scoop of Mango Lassi in 7 bowls which everyone oohed and ahhed over. A rich super creamy tangy treat with the sweet intense flavor of mangos, Mango Lassi was unlike any frozen yogurt we ever had and most of us thought our sample tasted more like ice cream than yogurt.  Knowing there were four more flavors in the freezer, we proceeded to taste each frozen yogurt which was immensely fun. 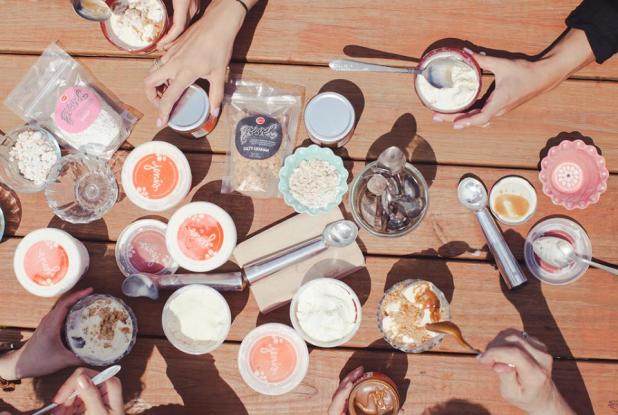 The Black Currant is a creamy blend of berries and cream that had the slight tang of yogurt yet tasted like creamy ice cream. The Lime with Cardamom has a zesty tart lime taste but is tempered by sweet cream and the floral taste and aroma of cardamom. Most of us expected the Grapefruit to be more like a sorbet but again the tangy grapefruit flavor was more creamy than tangy and easily won over those who don’t count themselves as grapefruit fans. And finally, the Lemon Blueberry was unique in both flavor and texture as the tart lemony flavor was ribboned with swirls of blueberry sauce and whole blueberries.

Jeni’s Splendid Frozen yogurts are made in Columbus, Ohio by Jeni Britton Bauer and her team of ice cream enthusiasts. A local celebrity with her nine “Jeni’s Splendid Ice Cream Shops” throughout Ohio (and two in Tennessee), Jeni is a virtual rock star in the world of frozen treats and it all starts with the milk. Jeni sources the milk and cream from Snowville Creamery in the foothills of the Appalachian Mountains in southeast Ohio.  The dairy cows graze on grass and are not treated with growth hormones.  The milk is not homogenized so the cream rises to the top the way it’s suppose to.

Yogurt cultures (from Seven Stars Farm at www.sevenstarsfarm.com) from 1% organic milk, fruit, juices, tapioca, spices, and other flavorings are combined to produce the best frozen yogurt we’ve ever tasted. The results of our taste test: we all had our favorites with Mango Lassi, Black Currant, and Lime Cardamom on everyone’s top three list. 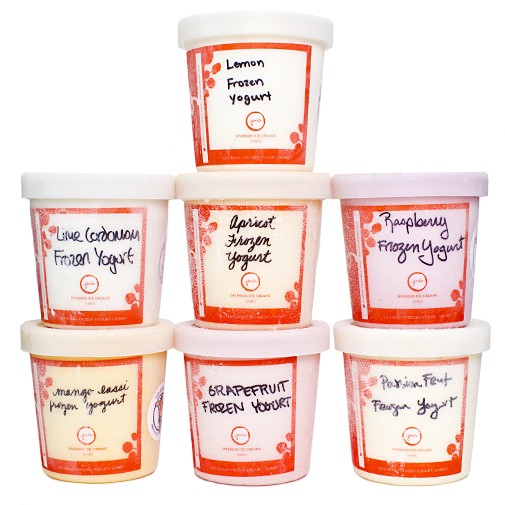 Each pint of frozen yogurt is $12 – expensive – but worth every penny. Considering a small soft serve cone is about $3 at the local ice cream shoppe, the pint of frozen yogurt which provides 7 small servings or 4 large servings is not only more economical but more importantly, tastier and a healthier alternative. Order on-line directly from Jeni’s Splendid Ice Creams (listed below) or go to the website and use  “Jeni’s Pint Finder”:  http://www.jenis.com/where-to-buy/ to obtain a list of stores that carry the company’s products. Note:  Flavors do change depending on the season.

Jeni recently published a book about making ice cream and frozen yogurt called “Jeni’s Splendid Ice Cream at Home” which won the 2012 James Beard Award and can be purchased at bookstores, at the company website, or on www.amazon.com.