She couldn’t see that no one else was perfect either, and that so much of love was the work of it.

Lucy Grealy (1963-2002) was 39 years old when she died of a heroin overdose in a friend’s apartment in New York City a few days before Christmas. Sad, lonely, and depressed, Grealy endured three decades of both physical and emotional pain before taking her life. A talented poet and writer, Grealy’s most recognized piece of work was “Autobiography of a Face” (1994) which recounted her experience with cancer of the jaw and the resulting disfigurement caused by dozens of surgical procedures both intended to save her life and reconstruct her face.

One of Grealy’s closest friends was Ann Patchett (author of Bel Canto and several other novels) who she met when they both attended Sarah Lawrence College in the early 1980’s although their friendship didn’t blossom until they both enrolled in the Iowa Writer’s Workshop a few years later. Sharing an apartment together in Iowa City brought them both together (“Iowa City in the eighties was never going to be Paris in the twenties, but we gave it our best shot.”) but it was their mutual love of the written word that forged a friendship that would last two decades. 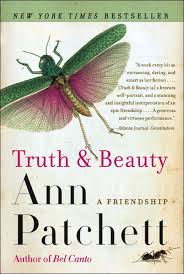 Truth & Beauty by Ann Patchett was published 18 months after Grealy’s death and is the story of the friendship between the writers from Patchett’s point of view – a key  point given the criticism Grealy’s two surviving sisters hurled at Patchett when the book was published. Claiming the book robbed them of their ability to grieve privately and wondering where they fit in in Lucy’s story (they don’t from Patchett’s point of view), the sisters were left bitter. They failed to see the journey depicted in Autobiography of a Face was the story of Lucy’s life from Lucy’s vantage point and that Truth & Beauty was the story of a friendship between two women from the vantage point of the surviving friend. That Grealy and Patchett had recognition, fame, and a ready audience which prohibited the Grealy sisters from ever getting their story out, seemed to just fuel the fire.

Several critics accused Patchett of revealing too much personal information in Truth & Beauty. By most accounts, Grealy was reckless and insatiable in her desire to be needed and loved and not just by a man, but by her friends, her friend’s friends, doctors, nurses, and the public. Sex, alcohol, drugs, and irresponsibility played a big part in Grealy’s life but she never tried to hide these aspects from her friends because she always needed them by her side to rescue her from herself.  Patchett would have done a disservice to both Grealy and herself if she had left these details out of the book because Grealy was who she was, trying to make the most of a painful life out in the open.

When Truth & Beauty was assigned to the freshman class at Clemson University several years ago, the religious right in South Carolina took issue with the story, claiming young adults should not read the book because of its offensive content.  Patchett saw this as an opportunity to tell the freshman class at Clemson in a convocation speech (The Right to Read) of their rights: to make decisions, to read what they choose, and not let other people decide what books should be read by young adults (Patchett wrote about this experience in a short story entitled “The Love Between Two Women is Not Normal“). Censorship has no place on our college campuses and I can’t help but think that Grealy would have been Patchett’s biggest supporter – running into her arms wrapping her waif-like self around Patchett after she defended the book and the right for adults to choose what they want to read.

She could talk. She could talk on the nature of truth and beauty for hours, and after all, what novel or poem or play in an Introduction to Literature class couldn’t benefit from a truth-and-beauty discussion?