Meru is a documentary film (2015) that chronicles the journey of three of the world’s best climbers – Conrad Anker, Jimmy Chin, and Renan Ozturk – in their pursuit of being the first climbers to ascend the Shark’s Fin, a 4,000 foot wall on the Meru Peak (see center of the photo below) in the Himalayas on the north side of India whose altitude is 6,660 meters. 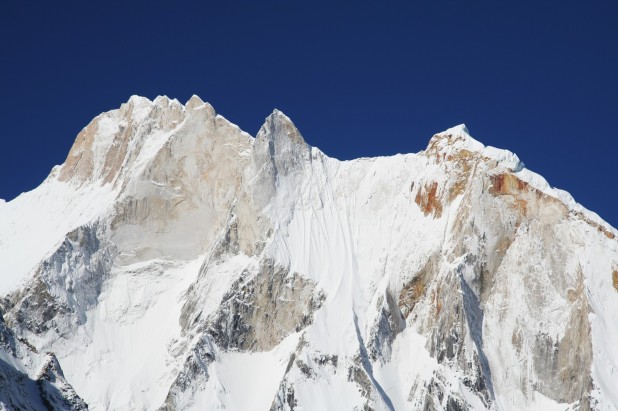 Recently released in the United States, after winning the US Audience Documentary Award at the Sundance Film Festival, Meru is fascinating, gripping and fast-moving although prior to seeing the film, you may wonder how the slow methodical climb of a beast of a mountain could possibly keep the attention of the audience.  Without a doubt, Meru sucks the audience in because the film provides information about the climbers, their families, friends, and the reasons behind their commitment to conquer a mountain that no one has ever been able to summit.

In October, 2008 the three elite climbers first attempted to ascend the Shark’s Fin but turned back about 300 feet before the summit for a variety of reasons. Their failure and what ensued over the next few years propelled them to try again and by September, 2011, Anker, Chin, and Ozturk were ready to try again. Under brutal conditions (watching this film reaffirmed my preference for heat and indoor plumbing), the three climbers loaded their 200 pound backpacks and set out to conquer Shark’s Fin.

At 21,850 feet (only!), the summit of Shark’s Fin is more than 7,000 feet lower in altitude than Mount Everest and about 145th on the list of the world’s highest peaks, so why climbers haven’t been able to summit this peak has a lot more to do with terrain, experience, knowledge, trust, physical stamina, and commitment than altitude. The beauty of the film is in the aspects of climbing that most of us don’t know beyond a rudimentary knowledge (as in who conquered Everest this year). At 90 minutes long, Meru takes the audience into the heads of three of the world’s most elite climbers for a second-hand experience that almost feels like you’re attached to one of their harnesses.