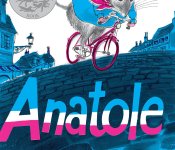 The best children’s books are those that are both written and illustrated to communicate a cultural issue that allows children to think about what’s being presented to them. These books often display humor or assign human characteristics to animal characters to make children laugh and encourage communication since kids don’t always know how to verbalize what they are feeling.

In Anatole, a children’s book written by Eve Titus and Illustrated by Paul Galdone, a family of mice (mom, dad, and six children) along with other mice live in a small village in Paris where they do what humans do:  read the paper, knit, take care of their children, wear clothes, play games, sleep, ride bikes, and hunt for food in the only source they know:  people’s homes. Of course, the homeowners are mortified that mice come into their homes so father mouse makes a plan:  He will give people something in return for their untold generosity. He will help them make better cheese by leaving his opinion on cheese left in the tasting room of a cheese factory.

A clever book – what better way to put mice, especially French mice, higher on the rodent social caste system then to put a beret on their heads and have them be connoisseurs of cheese? Titus and Galdone took the social outcasts of the animal world and gave them human qualities to help show young readers that even the lowest of the low deserve reconsideration.

I like to think of Anatole as a book that teaches children that both humans and animals share universal truths: they have families that include parents who love, care for, and protect children. But, there is also the very powerful message of giving back. Humans don’t want to be scorned or unloved so they will seek out ways to give back to gain acceptance and love. By giving mice these very human characteristics, the reader comes to understand the importance of reciprocity and the importance of valuing those different from ourselves.

In America, we value dogs and cats as pets; in other societies people place no importance on what we consider pets and consider them food (an idea that is abhorrent to most of us while we eat turkeys, cows, chickens, lambs, sheep, pigs, and fish) with the message being that many of us value animals when they display human characteristics: kindness, loyalty, and playfulness. Absent these attributes, we diminish their worthiness allowing us to use them without thinking much about them.

So, when the authors of Anatole took cultural norms (the importance of cheese), human behaviors (social acceptance), and universal behaviors (the joy of eating and caring for the young) and applied these attributes to the mouse world, they showed readers that we have more in common with animals than we think.

An award-winning book (a Caldecott Honor Book), Anatole in all its predictability is still a fantastic and entertaining book to read to young children who are still trying to figure out their place in the animal world.