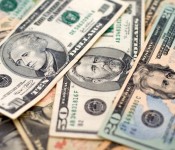 Total revenue was $39 million (up form $37 million the prior year) most of which came from six sources:

As illustrated above, membership dues are the largest source of revenue with programs/meetings and registration/ examination fees right behind. Collectively, these three sources provided 77% of the revenue in the 2017-2018 year.

$39 million in expenses were categorized as follows:

Grants were to the Academy of Nutrition and Dietetics Foundation for general support and scholarship program.

$41 out of every $100 in revenue was spent on compensating the employees of the organization while $18 out of very $100 was spent on travel and conferences. The remaining $41 was spent on fees for services, office-related expenses, publications, postage, and other expenses.

At the beginning of the year, AND had nearly $20 million in net assets. Even though the organization raised $39 million and spent $39 million, the net fund balance increased to $21 million – because of an unrealized gain on investments.