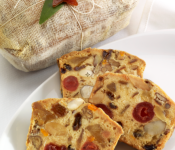 It’s that time of year when we are all thinking about decadent desserts so before David Letterman delivers his top ten list of fruitcake uses or the NRA suggests using slices of Aunt Martha’s fruitcake in the next skeet shooting contest, consider for a moment that fruitcake isn’t as bad as the masses make it out to be.

Most people believe there are two truths to fruitcake: people either love it or hate it but nearly everyone would love this traditional holiday dessert if they tasted a fruitcake made by Robert Lambert of San Rafael, California, a man totally dedicated to the art of making decadent, delicious fruitcake that can make even the most vocal critic grin and beg for seconds. 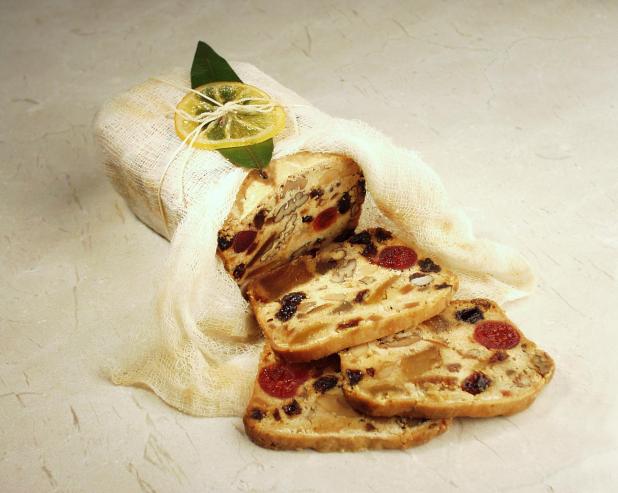 The finished cake is wrapped in cheesecloth and tied with a linen string, doused with a fine French cognac (brandy) infused with herbs and spices, and then topped with a fresh bay leaf and citrus peel. The cake is allowed to age for at least a month (the flavors enhance with time) and then wrapped in a cellophane bag for shipping.

Each fruitcake weighs 1 pound and is approximately 6 inches long, 3 inches wide, and 2 inches high. A small cake for sure but one that easily serves 8-10 people. The cakes are expensive – $55 each  – but worth it because this fruitcake is really unlike any other fruitcake you’ve tasted: a symphony of flavors in every moist, nutty, chewy bite. Lambert also offers two fruitcakes in a holiday tin (your choice of flavors) for $100. The 1-year old aged White Fruitcake is $65 and the 2-year old aged Dark Fruitcake is $75. Quantities are limited so order early.

To read more about Robert Lambert Fruitcake or to place an order, go to the company website:  www.robertlambert.com.