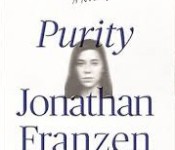 Secrets were power. Money was power. Being needed was power. Power, power, power: how could the world be organized around the struggle for a thing so lonely and oppressive in the having of it?

In Jonathan Franzen’s newest novel Purity, the author introduces the reader to Purity (“Pip”) Tyler, a 23-year old recent college graduate with $130,000 in student loan debt living in a squatter’s house in Oakland, California. Distancing herself from the mother who raised her in the Santa Cruz mountains, trying to find her biological father, and employed in a dead-end job, Pip is all but disillusioned about the world and the impact she will make on it.  When offered an internship to work for the Sunlight Project – an organization that prides itself on leaking government secrets – in Bolivia, Pip takes a leap of faith, quits her job, packs up, and moves to South America.

While in Bolivia, Pip meets Andreas Wolf (one of the four major characters in the book), a middle-aged narcissistic pleasure-seeker, whose last name is indicative of his ability to “always spot the weak lamb in the flock.” Born in 1960, Wolf grew up in East Berlin, Germany protected by his parents until the wall came down when he set upon his life’s work: exposing other people’s secrets. In 2000, Wolf founded the Sunlight Project which initially focused on exposing the secrets of the Germans but later broadened the organization’s focus to expose social injustices and toxic secrets throughout the world. Fleeing Germany in 2006, Wolf went to Denmark and then Belize before settling in Bolivia with a faithful group of supporters.

Pip’s internship leads to another position with Denver Independent, an investigative on-line news service founded by Tom Aberant, another key character, who was previously married to Anabel, an artist who came from one of the families that owns McCaskill, the biggest privately held food products company in the world. How these four characters (Pip, Andreas, Tom, and Anabel) are tied together is the true story of Purity, a 563-page novel divided into seven chapters (Purity in Oakland, The Republic of Bad Taste, Too Much Information, Moonglow Dairy, [lelo9n8aOrd], The Killer, and The Rain Comes) whose titles are clever and as much fun to figure out as the story itself.

Throughout the novel, Franzen shows the reader the difficulty people have in leading a life of ideological purity. The most well-intentioned are no less susceptible to the weaknesses of the human heart and the character flaws that make us human (“Everyone thinks they have strict limits, until they cross them.”). What differentiates one person from another is often secrets – a recurring subject throughout the story that Franzen keeps front and center. Make no mistake, secrets are power and the exposing of secrets is often dangerous.

Although the story is fantastically woven and told from different perspectives and timeframes, the true entertainment in a Franzen novel is always in the writing style and the recurring themes he includes in most of his novels: the difficult mother, the relationship between parents and children, family control, the fruitless journey of trying to be somebody you aren’t, marriage, resentment, and the difficulty in exiting a relationship.

Along the way, there are the Franzen rants: jabs at big food by using “McCaskill” as the name of the largest food company in the world, which appears to be a play on McDonald’s and Cargill, and the nuclear industry by accurately pointing out the absurdity of having more than 17,000 nuclear warheads on this planet. Vegetarians and vegans are not exempt either with a rant on Moosewood Cookbook’s tendency towards mushy dessert recipes (it’s true) and a dinner scene in which a character seems intent on offending the vegetarian and vegan at the table by ordering two of the most offensive items on the menu: foie gras and a veal chop. The irony of a shampoo called “Mane n’ Tail” used by a beautiful but difficult woman is also not lost on the reader.

Franzen also pokes fun at himself by referring to the proliferation of authors named Jonathan (a reference to Jonathan Savoir Faire is actually Jonathan Safran Foer) in the New York Times Book Review, meaning he isn’t the only Jonathan of literature fame. The pressure to write the “thick” novel is also duly noted with the underlying thought probably the length of the last three novels that won the Pulitzer prize (All the Light We Cannot See (544 pages ), The Goldfinch (784 pages), The Orphan Master’s Son (443 pages).

Silicon Valley, venture capitalists, wayward millionaires (Milliken, Epstein?), and technology (“Nature even on the most local of scales made a mockery of information technology.”) are not spared. But Franzen also praises the little known: The Adirondack Review – a quarterly publication that features poetry, literature, artwork, and photography, and the places and things important to him (Santa Cruz where he has a home and Germany where he studied), all of which make the reader wish there were a chapter 8, 9 and 10.

There’s the imperative to keep secrets, and the imperative to have them known. How do you know that you’re a person, distinct from other people? By keeping certain things to yourself. You guard them inside you, because, if you don’t there’s no distinction between inside and outside. Secrets are the way you know you even have an inside.”