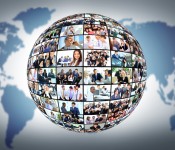 This past week, I decided to take a different approach to Facebook because I just wasn’t feeling authentic about the whole social media world. With sincerity guiding me, I went through my “friend” list and started unfriending people because (a) I don’t really know them; (b) I’ve known them for decades but have not kept in contact with them (grade school or high school acquaintances); (c) I do business with them; or (d) because they are in another group of acquaintances (i.e. kids of friends). It’s not that I don’t like these people. In fact, there are several “friends” that seem very nice but whom I hardly know which makes sharing personal moments awkward.

My husband jokes that he has 14 friends on Facebook, several of whom irritate him with their various rants. Let’s face it. Facebook can be an incredibly annoying vehicle with the political, religious, environmental, and personal postings of friends. As much as we would like to change people’s minds and they ours, this rarely ever happens. And, so at the risk of hurting other people’s feelings, we simply expel them to the status of “unfollow” or ignore them.

Sometimes I’ve wondered if I ever really knew someone before Facebook came along and I’d be less than honest if I didn’t admit that beyond the weather, I don’t know what some of us would talk about. But, there are several friends whose friendship I cherish even though we will never agree on issues that include elections, a woman’s right to choose, gun control, and as basic as what’s on the dinner plate.  With deep friendship there is often a comfort in being yourself and being able to agree to disagree on these issues and I so I keep these friends because my life is enriched with them in it. Of course, there are “friends” I’ve kept that I may not be as close to as I was in the past  and, yet I still feel a connection to them. And, finally there are those who I want to know better. The thing they all have in common is that I feel a certain level of personal comfort with them.

So, I went honest. With no intention to hurt anyone’s feelings, I narrowed down my friend list and guess what? I don’t exactly feel good because I still worry about people’s reactions but I feel better. Of course, I sent a few e-mails to some “friends” explaining my decision, not wanting to hurt their feelings because really, this action is about sincerity, which Facebook often lacks.