First time authors are rarely known to write a truly exceptional book but Lisa Halliday accomplished the nearly impossible when she published Asymmetry:  a collection of three short stories, two that appear to be related (Folly and Ezra Blazer’s Desert Island Discs) and one that appears to be asymmetrical but is clearly the star of the show (Madness).

In Folly, Alice, a twenty-something assistant editor at a publishing house in New York City meets Ezra Blazer, an elderly well known and universally respected writer of classic 20th century fiction who has yet to win the Nobel Prize for fiction. Blazer was probably once a player with rugged good looks and a shocking head of thick hair but time has not been kind to the author who complains about back pain, his heart problems, and the other ailments that haunt the elderly.

Despite the loss of his looks and proulness, Ezra can still get the girl because of who he is and that’s exactly what happens when he meets the demure I-can’t-figure-out-how-to-be-a-writer Alice who is just beginning to become the writer she will become. The older, experienced, wealthy, and powerful man meets the young, inexperienced, and student loan laden young adult with possibilities. Is there any thing more cliche than the  professor and the student or the elderly talented man and young beautiful woman with promise? 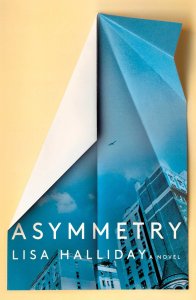 Most readers are aware that the author, when she was in her 20’s – was involved with Philip Roth, the writer (who coincidently had not won a Nobel Prize but did win the Pulitzer in 1997). Although the author claims the stories in Asymmetry are fiction, there are those who think otherwise or who like to think that Halliday did the unthinkable:  she wrote the Roman á Clef. Of course, she denies it (who wouldn’t?) because the picture is not flattering of Alice (please, just speak up, and go have sex with someone who really knows how to satisfy you) or Ezra (go find someone within a generation of yours) but in thinking about the powerful and the seemingly weak, the wealthy and the poor, maturity and youth, and the frail and the beautiful, how can it not be? The story is predictable and one in which many readers are familiar. When the story ends, its almost anti-climatic because predictably Alice has to decide whether she wants to be his caretaker or follow her own dream to be a writer.

The second story – Madness – is a brilliant tale told from the perspective of a young man who holds both American and Iraqi citizenship.  Amar Ala Jaafari is an economist of Iraqi and Kurdish descent who is on his way to Iraq to find out what happened to his brother who has gone missing. From California, Amar flies to London with plans to connect to a flight to Kurdistan but is detained at Heathrow (after all, it is 2008) for questioning. While detained, Amar tells the reader the story of his life: his family, childhood, American education, and his girlfriend, which is fascinating. It’s a lesson for all of us to understand the humanness of those we judge and suspect of being less than human.

Although Madness and Folly appear to be asymmetrical (and, they are in many ways), it is only when the reader finishes the last story – Ezra Blazer’s Desert Island Discs – is there the realization that the stories are a timeline with Folly setting the stage (in the early 2000’s), Madness the pinnacle of what Alice aspired to accomplish (2008), and then Ezra Blazer’s Desert Island Discs when the very elderly writer has finally won the Nobel Prize but must now acknowledge the supreme talent that has emerged (most recently).  The stories are really all about Alice – her latching on to a man who had what she didn’t yet possess (Folly), her accomplishment years later on full frontal display (Madness), and the aftermath when her long lost lover admits in a BBC broadcast that his old friend recently published a book (Ezra Blazer’s Desert Island Discs).

Philip Roth passed away in May, 2018, about three months after Asymmetry was published. In several interviews, both Halliday and Roth acknowledge that Roth read the book, calling it a “considerable achievement.”