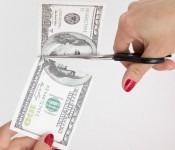 The mission of the American Diabetes Association is to prevent and cure diabetes and to improve the lives of all people affected by diabetes.

Established more than 80 years ago in 1940 when less than a million Americans (or less than 1% of the population) had diabetes, the American Diabetes Association (ADA) is one of the few (if not only) non-profit organizations working against a disease that has increased thirtyfold (The CDC estimates that more than 30 million people (nearly 10% of the population) in the USA have diabetes – primarily Type 2 which is largely preventable and reversible – and that another 100 million people have pre-diabetes which if not treated often leads to Type 2 within 5 years) over the decades despite hundreds of millions of dollars raised by the organization.

For years, the ADA raised significant amounts of funds but times changed in 2014. After 4 straight years of declining revenues (see chart below; numbers in millions except the average compensation “Avg Comp” which is expressed in actual dollars), the ADA briefly reversed the financial trend in 2018, after bringing in a new Chief Executive Officer along with several other executives.

However, in 2019 and again in 2020, revenues declined again but so did expenses which resulted in the ADA adding $9 million of unspent revenue to the general fund. In 2021, revenue increased by $20 million over the previous year while the organization cut expenses by nearly $20 million, resulting in a significant improvement in net assets (which doesn’t necessarily help the organization reach its mission because money sitting in savings is money not being used to educate the public to make better dietary choices).

The scale back can clearly be seen in looking at the decrease in employees from a high of 1,562 in 2013 to 333 in 2021. It is also interesting to note that although the number of employees has decreased, the average compensation has significantly increased.

But, the real test for the ADA is whether they will ever meet their stated goal of preventing and curing diabetes – one of the most prevalent and fastest growing diseases in the USA.

We can look at the numbers but if the ADA continues to do what they have been doing for years to prevent and reverse diabetes, they are unlikely to meet their goals because it’s not working (hint:  they may want to start by redoing the Diabetes Food Hub which include recipes for deviled eggs, bacon wrapped shrimp, 582 recipes for chicken, 1,521 recipes that contain oil, 192 recipes that contain butter (up from 91 the prior year), 48 recipes for bacon (a Type 1 carcinogen by the World Health Organization), 108 recipes for beef, and 362 recipes for eggs.  Note:  for a detailed explanation of why the above foods are not good for Type 2 Diabetes, click here.

In 2021, the ADA raised $138 million which came primarily from four sources:

Expenses totaled $79 million (not including $3 million in depreciation) in 2021 and can be viewed two ways:  by broad general category (i.e. grant, program services, fundraising, management and general expenses) or by specific line item categories (i.e. compensation, office-related expenses, travel and conferences, fees for services, grants, etc). Both are beneficial with the latter approach providing more detail on how revenue was spent.

The $79 million (57% of revenue) in expenses were categorized as follows:

It is important to note that grants are usually included as a part of program services but it is helpful to separate the two figures out when seeking to understand the role of awarding grants in a non-profit.

For many diseases, non-profits raise funds to award grants for research in hopes of learning more about the disease in search of a cure. What makes Type 2 diabetes so unique is that the disease is largely preventable and reversible with lifestyle changes in diet. Consequently, the awarding of grants is not a significant part of program services at ADA.

In 2021, ADA made $8 million in grants with most awarded to The American Diabetes Association Research Foundation, a non-profit that operates out of the same office as the ADA.

As illustrated above, the ADA spent $79 million of the $138 million raised, or 57% of revenue.  The unspent revenue – $56 million – was allocated to the general fund which contributed to the change in net assets from $91 million at the beginning of the year to $157 million at year-end.

The $79 million in expenses were categorized as follows:

74  employees received more than $100,000 in compensation with the most highly compensated employee reported to be Tracey D Brown, the Chief Executive Officer who received $1.2 million (although she departed on October 6).

-$  5:  Printing and Publications, Postage and Handling

In summary, the ADA is a non-profit whose mission is to prevent and cure a disease (diabetes) that is one of the fastest growing diseases in the country. Although the ADA has been around for 80 years and has raised hundreds of millions of dollars, the organization has been unable to prevent and cure or even stop the growth of Type 2 diabetes, which is largely preventable and reversible with dietary changes.

From 2014-2017, revenues declined from $216 million to $144 million while the general fund fell from $79 million to $36 million. Changes in management were made in 2018 which resulted in staff cuts, slashing expenses, and not spending as much as the organization raised (presumably to strengthen the balance sheet). Revenue increased to $158 million in 2018 (from $144 million in 2017) but declined in 2109 to $147 million and to $118 million in 2020 with the ADA controlling spending which resulted in net assets to increase to $92 million at the end of 2020. In 2021, the ADA managed to increase revenue to $138 million while continuing to drastically cut expenses which again resulted in a substantial increase in net assets from $91 million at the beginning of the year to $157 million at year-end.

Although the balance sheet has significantly strengthened, preventing and reversing Type 2 diabetes will not be accomplished unless the ADA becomes more effective in changing dietary habits (and they can start by changing the Diabetes Food Hub recipes to exclude oil, animal products, white flour, sugar and foods with saturated fat).  Telling the public the truth about how Type 2 diabetes can be prevented and reversed may alienate most of the public but at least give them the information so they can make better dietary decisions.