At a recent author forum in West Hartford, Connecticut, Julie Orringer spoke about how she came to write “The Invisible Bridge.” An American by birth, Orringer’s roots are in Hungary and the novel is loosely based on her grandfather and his brothers’ lives in the years leading up to and during World War II, before the family immigrated to the United States. As an adult, Orringer realized the stories she heard as a child needed to be told because people – and in particular her family – were deeply affected by the seismic events that took place in Europe in the late 1930’s and early 1940’s.  That her ancestors were Jews in a country that was aligned with Germany at the time adds to the sense of horror. Using personal accounts from her family, historical research and a talent for story telling, Orringer wrote the novel “The Invisible Bridge:” a fictional story of a Hungarian family whose lives were shattered because they were Jewish. END_OF_DOCUMENT_TOKEN_TO_BE_REPLACED 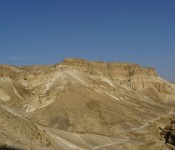 On a family vacation to Israel, we decided to take a day trip from Jerusalem to Masada, an archeological ruin in the Judean Desert overlooking the southwest coast of the Dead Sea. The concierge at the hotel made arrangements with a local tour company and we were picked up very early the next morning. The driver had a large van and after picking up several other small groups of tourists at local hotels in Jerusalem, we set off for Masada – a roughly 60 mile trip southeast of Jerusalem on the southern coast of the Dead Sea. END_OF_DOCUMENT_TOKEN_TO_BE_REPLACED