Franzen and Irving: Rock Stars of the Literary World

Several months ago, Jonathan Franzen and John Irving appeared together at a book club forum in Hartford, Connecticut.  I was giddy with excitement at the prospect of seeing two of my favorite authors in a panel discussion.  This wasn’t a book store appearance but a chance to hear two very talented authors speak about writing and their thoughts on literature. My husband compared my enthusiasm to the anticipation most people feel before an upcoming rock concert. Point well taken but Franzen and Irving are rock stars in the oft ignored literary world. 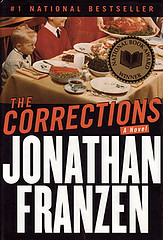 Jonathan Franzen shows us a truth we don’t always want to see: most of what happens to us is a result of the decisions we make throughout our lives. His characters are complicated but real and often disappointing. What is truly intriguing though is how the reader can identify with Franzen’s characters as no great rhetoric is used to mask the flawed human beings they are.

We all see a bit of ourselves in his characters.  How he gets the “woman” thing right though (after all, Franzen is a man and he’s not suppose to know how we think) is part of what makes him the great character writer he is.

Franzen reminds me of George Harrison: the quiet Beatle.  Immensely talented and understated, he lets his art speak for itself just as I believe Franzen does.  Several years ago there was a reported “dispute” between Franzen and Oprah Winfrey when Franzen declined to have “The Corrections” included on Oprah’s book club list because he thought men would be dissuaded from reading the book.

The media was all over Franzen with accusations of being ungrateful. He was in fact being truthful because most of Oprah’s book club followers are women and he may have been afraid the novel would be classified as “chick lit” – a true insult to a writer of Franzen’s caliber. Franzen could have sold out and pandered to Oprah but he didn’t, believing the book speaks for itself. George Harrison didn’t succumb to the temptations of celebrity either – his journey was often the spiritual search succinctly expressed through his music….”My Sweet Lord” comes to mind.

At the forum in Connecticut, the first twenty minutes can be best described as slow and a bit painful to watch as the moderator tried to draw the authors out.  I reminded myself that these men sit alone in a room most of their working lives and write.  Entertaining a few thousand people in a performing arts center is not their forte otherwise they would have chosen a different field.  But, just as my expectations were lowered,  John Irving came alive and had the audience laughing, clapping, and roaring with a rant on the necessity for dysfunctional characters in fiction. If you want to see this lively exchange, go to www.youtube.com/watch?v=HMh5wLSRp54 – it is hilarious.

John Irving who is more gregarious than Franzen reminds me of Eric Clapton:  deeply introspective, committed but also in search of fun.  He’s got a message and wants it heard on his terms.  I once read that Eric Clapton’s band mates gave him a nickname:  Slowhand. Invariably, Clapton would break a guitar string during a concert and instead of using another guitar, he would stop playing and restring the damaged instrument. During the wait, the audience would do a slow handclap to let him know they were waiting – hence, the nickname as a play on words to describe the musician and the audience response.

After Irving published “The World According to Garp,” he became well-known and those of us who enjoyed his writing would wait years for his next novel: “The Hotel New Hampshire” followed by “The Cider House Rules” and eventually “A Widow For One Year” (my personal favorite).  The wait is always worth it just as I’m sure the concert goers felt Clapton’s music was worth waiting for. So, while I wait for Franzen’s and Irving’s upcoming books and feel impatient, I remind myself of “slowhand” and know the wait will be worth it.