A Weekend at the Alhambra in Granada, Spain

Granada, Spain is the capital of the Province of Granada and in the autonomous community of Andalusia in southern Spain.  Although Granada is only an hour from the Mediterranean Sea, the city sits at the foot of the Sierra Nevada mountain range.

Some people would argue that southern Spain is most well-known for the olives or almonds that are grown but Granada is most famous for the Alhambra, a UNESCO World Heritage Site that was originally a military fortress in the 9th century but emerged as a major post of the Muslim Nasrid kingdom from the 13th to the 15th centuries. In the late 15th century (1492 was an exceptionally good year for the Spanish), the Alhambra was captured by the Spanish monarchs (Fernindad and Isabel) and except of a brief period when the French controlled the area in the early 1800’s, the site has remained under Spanish control. 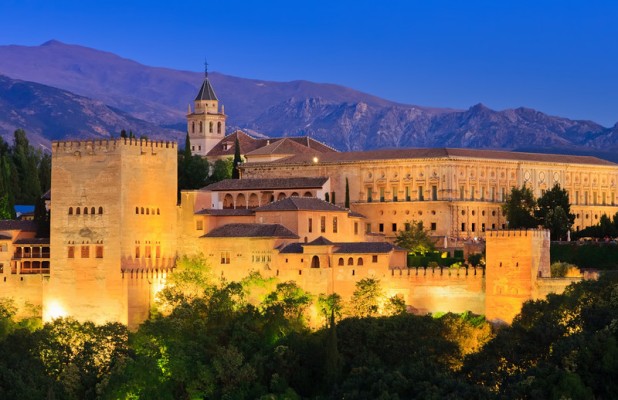 On-site is the Parador de Granada which is the most convenient place to stay. Located on the grounds of the Alhambra, the 15th century convent that was converted to a parador (hotel) is hugely popular so make reservations well in advance because there are only 40 rooms. 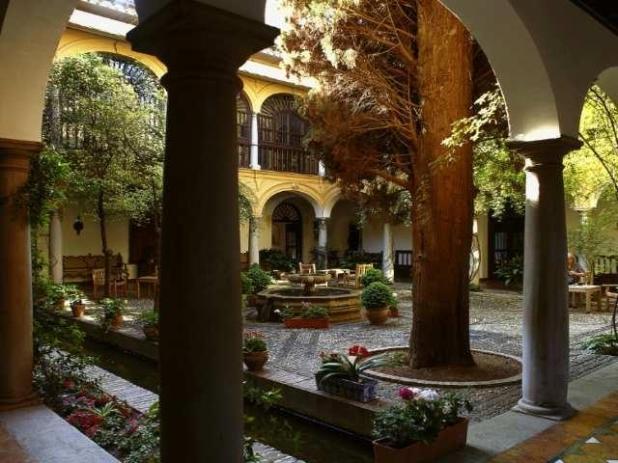 The parador has a restaurant, bar, outdoor garden areas, air conditioning, wifi, and parking. Rates start at 175 Euros ($225) per night, including breakfast but check the website for promotions and packages. The hotel is not grand but the convenient location makes up for any deficiencies in the rooms and the restaurant on-site eliminates the need to drive into Granada.

The Alhambra
The Alhambra is a complex of buildings built on a steep rock formation visible for miles.

The Alhambra is vast and best understood by looking at the four major parts:
Alcazaba
The Alcazaba is the citadel and fortified walled complex that was initially constructed in the 9th century. Beautiful views can be appreciated from the watchtower, as illustrated below. 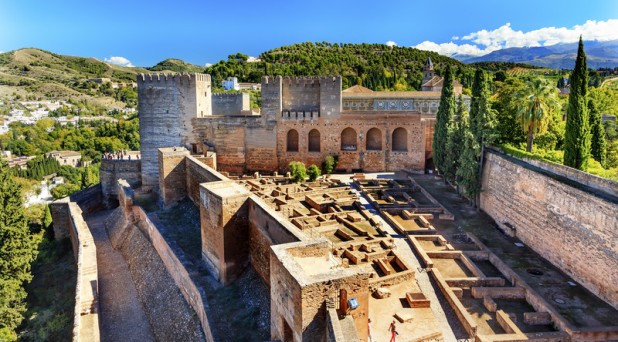 Palacio Carlos V
The Palacio Carlos V is a square-shaped building with a circular center (as pictured below) that was built within the walls of the Alhambra after the Spanish conquered Granada to ensure proper housing for the new ruling class.  Within the palace are two museums: Museo de la Alhambra with artifacts and art from the Alhambra and the Museo de Bellas Artes which is a fine art museum.

Generalife
Generalife consists of the gardens, fountains, and pools where the inhabitants enjoyed their lives. Explore the grounds by foot on the walking paths, trails, and vine-covered walkways.

To see and fully appreciate the Alhambra, a weekend or two-day stay should be considered. This Alhambra is one of the most popular tourist sites in Spain and the number of visitors are tightly controlled to avoid overcrowding which means tickets should be purchased in advance. However, tickets can be purchased on-site at the ticket office but be prepared to stand in line.

Go to www.alhambra.org for hours, ticket information, recommended tours, information and advice. Entrance tickets are either for morning (8:30 – 2:00) or afternoon (2:00 – 6:00 or 8:00, depending on the season) although there are some evening tours limited to the palaces from 8:00 – 9:30 or 10:00 – 11:30, depending on the time of the year.  Best to purchase the morning ticket and then go back to the parador for the mid-day meal as lunch is typically served from 2:00 – 5:00 in Spain. Afterwards, take a siesta or relax by enjoying the gardens. Wake up refreshed and go back to the Alhambra the second day during the morning session to finish seeing this spectacular treasure.