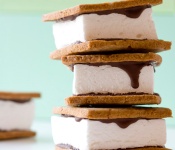 Nearly 5 years ago, Rosie Daykin, an interior designer with a passion for baking opened “Butter,” a bakery in the Dunbar neighborhood of Vancouver’s west side. Butter sells a wide selection of baked goods: muffins, cupcakes, scones, cakes, cookies, cinnamon buns, pies tarts, and loaves. But, what sets Butter apart from other gourmet bakeries is her marshmallows: fluffy hand-cut marshmallows with no artificial colors, flavors, or preservatives.

In 2010, her raspberry marshmallows won the Silver SOFI (Special Outstanding Food Innovation) Award at the Fancy Food Show (equivalent to winning an Emmy Award in food) in New York City.

Butter Baked Goods Marshmallows contain sugar, corn syrup, water, gelatin, vanilla, salt, and if flavored, the natural flavoring. These gourmet confections are meant to be enjoyed as is but they also make a wicked s’more: rich, dark chocolate and a Butter Vanilla marshmallow between two graham crackers. Roughing it around the campfire never tasted so good. I could be a Girl Scout again if I had these to look forward to in the great outdoors.

Butter Baked Goods Marshmallows are available at more than 300 gourmet stores in North America including Dean and Deluca (www.deananddeluca.com). Each bag of ten large hand-cut marshmallows sells for approximately $8. Expensive but worth every penny. Refer to the company website listed below or give them a call to obtain a list of the stores that carry the Butter Baked Goods Marshmallows.