Fregula is a type of pasta from Sardinia that resembles toasted pearls. Some people think fregula is like couscous but this unique pasta is bigger, thicker, and more flavorful than couscous. Fregula or the “pearl of pastas” is made with coarse semolina flour blended with water and formed into little balls. The pasta is then dried and toasted to impart a nutty flavor when cooked. Ideal for soups or with cooked vegetables, fregula is a firm chewy pasta with a deep toasted flavor, unlike any other pasta.

The first time I cooked fregula, I looked at the bag for directions which were limited to “cook until al dente” leading me to think the pasta would cook in just a few minutes because the pasta pieces are so tiny. At 3 minutes I took a few pearls out of the water, rinsed them and tasted but the pasta was still hard. I continued to do this every 2-3 minutes until finally after 14 minutes, the fregula reached an al dente texture. Sa fregula (the name the Italians gave this pasta) is dense and will triple in size during the cooking process resulting in a chewy textured (but not gummy) pasta.

La Casa del Grano has been making sa fregula pasta (in small, medium and large) for more than 50 years. The pasta is sold in 1.1 pound (500 gram) bags and is available at Whole Foods for about $9 or on-line at www.amazon for $7-$9, depending on the size or www.gourmet-food.com.. A 1/3 cup serving (2 ounces) contains 6 grams of protein and 2 grams of dietary fiber. Ideal for soups or with cooked vegetables, the recipe below was created for those who love pasta and vegetables. 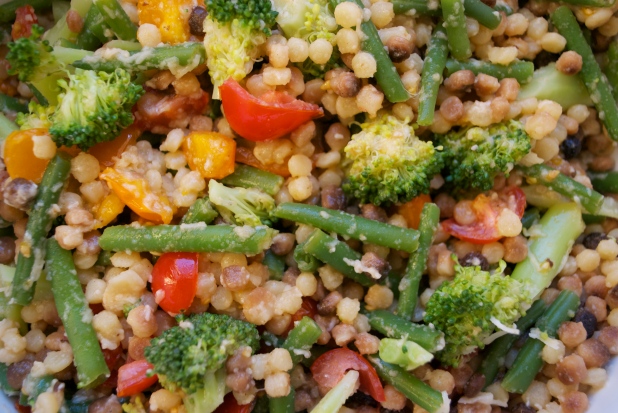