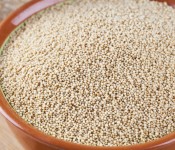 At a food show recently, several vendors were showing amaranth bars which reminded me of the snack bars I would see in Mexico. Nearly white in color, amaranth almost looks like sesame seeds from afar and bits of popcorn up close. Intrigued, I read the label and was impressed with the nutritional information so I ordered a bag of whole seed amaranth and started on a journey to learn about this ancient grain and how to incorporate it into modern recipes.

Cultivated for more than 8,000 years, this tiny grain – which is actually a seed – was called “the golden grain of the Gods” by the Aztecs who utilized amaranth as a staple in their diet.  Gluten-free and a source of complete protein (it contains all the essential amino acids), Amaranth has an earthy, nutty flavor when popped or cooked.

To pop, place 1 tablespoon of amaranth seeds into a wide bottomed pan (no oil needed) over medium-high heat. Cover and cook for about 30 seconds allowing the seeds to pop. Remove and repeat until the desired amount is obtained. To cook amaranth seeds, add 1 cup of amaranth to 3 cups of boiling water. Cover, and reduce the heat to low to maintain a low simmer for about 20-25 minutes, until the water is absorbed. 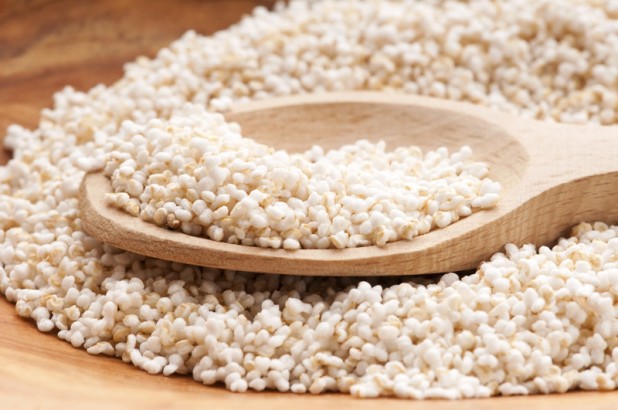 Amaranth can be used as a breakfast porridge and is delicious with cinnamon, dried fruits and nuts. This ancient grain is also a great addition to homemade granola, homemade energy bars, and soups.  In Mexico, popped amaranth is mixed with honey, sugar, or molasses (depending on the version)  to make a sweet confection called alegria (which means “happy” or “joy” in Spanish).