“We Are All Completely Beside Ourselves” 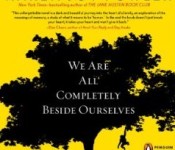 Once upon a time, there was a happy family – a mother, a father, a son, and two daughters. The older daughter was smart and agile, …..and very beautiful. The younger was ordinary. Still, their parents and their brother loved them both.

Karen Joy Fowler, author of The Jane Austin Book Club recently had her sixth novel, We Are All Completely Beside Ourselves published – a book so full of surprises that writing a book review is difficult and challenging without giving away details that shouldn’t be told. Suffice to say, We Are All Completely Beside Ourselves is a powerful story that will break your heart but also make you smile for the ending is so amazing, so touching, and so perfect that tears will come to your eyes. 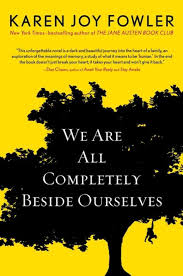 The story begins in 1996.  22-year old Rosemary “Rosie” Cooke has returned home to Bloomington, Indiana for Thanksgiving. Currently enrolled in her fifth year at the University of California at Davis, Rosie has been forced to come home by her father, who just got her off on an insignificant arrest charge that resulted from her being in the wrong place at the wrong time on campus. Rosie hasn’t seen her brother, Lowell or twin sister, Fern in years so the thought of spending the holidays with her parents is fraught with anxiety and insecurities.

You know how everything seems so normal when you’re growing up….and then comes this moment when you realize your whole family is nuts?

Told in Rosie’s voice, We Are All Completely Beside Ourselves is the story of a family dealing with a series of tragic events whose effects reverberate for decades. The mother, father, son, and daughters love each other but don’t know how to love and most importantly, don’t know how to communicate – decipher between truth and fiction – and forgive.

As many authors like to do, Fowler opens each chapter of the book using a quote from a story written by another author; in this case, a short story called A Report to an Academy by Frank Kafka. Written in 1917, A Report to an Academy is the story of Red Peter, an ape who has learned to act like a human, not because he wanted to be a human but because he didn’t want to live his life in a cage.  Most people are more familiar with Kafka’s book – The Trial in which a man is arrested and prosecuted for an undefined crime leaving him bitterly frustrated over his inability to change his circumstances.  Both stories show the dark side of human nature and the drive to survive – key themes in We Are All Completely Beside Ourselves.

Fowler’s book is a haunting tale that probably has more truth than fiction written on its pages. What comes through is that we are sometimes so cut off from the suffering and brutality in this world in our quest to further our goals –  to eat, to live, to enjoy – that we become insensitive. As Rosie’s brother, Lowell reminds her “the world runs on the fuel of this endless, fathomless misery. People know it, but they don’t mind what they don’t see. Make them look and they mind, but you’re the one they hate, because you’re the one that made them look.”

We Are All Completely Beside Ourselves should be required reading for all who keep themselves in the safe zone.

The sunset you see is always better than the one you don’t.

Read more from Books and Essays, Fiction
A Report to an Academy, Book Review, Fiction, Frank Kafka, Karen Joy Fowler, The Trial, We Are All Completely Beside Ourselves
← Life with a Veganista
Engine 2 Plant-Strong Products →