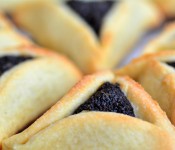 A Hamantashen is a three-cornered pastry pocket stuffed with a sweet filling.  Soft and chewy, Hamantashen is similar to a cookie and typically eaten during Purim – a holiday in which the Jews celebrate being saved from persecution in ancient Persia. Purim is usually celebrated in March (as determined by the Hebrew calendar) but through the years, Hamantashen has become very popular so the cookie is often served year-round and consumed by both Jews and non-Jews alike.

There are many variations of the origin and meaning of Hamantashen with the most popular being the pastry was named for the villain “Haman” who plotted to kill the Jews, with the letters “tashen” – a derivative of the German word “taschen” meaning “pocket” – added to signify Haman’s pockets – which were filled with poppy seeds instead of money.

Although Hamantashen are traditionally made with a poppy seed filling, popular fillings also include apricot, raspberry, prune, and vanilla bean cream cheese. I’ve never tasted a Hamantashen I didn’t like but my favorite Hamantashen are made by two bakeries 600 miles apart: Irene’s Bakery and Gourmet Kitchen in Bensalem, Pennsylvania and Zingerman’s Bakehouse in Ann Arbor, Michigan, who spells their bakery creation Hamentaschen and report the cookie shape is based on the three-cornered hat that the wicked Haman wore.

Irene’s Bakery and Gourmet Kitchen (www.irenesbakery.com) is an old world-style Jewish bakery using natural and organic ingredients with no artificial flavor, colors, additives, hydrogenated oils, or preservatives in the baked goods. The ingredients list is impressive but what I love about Irene’s Hamantashen is the taste and lightness of the pastry. 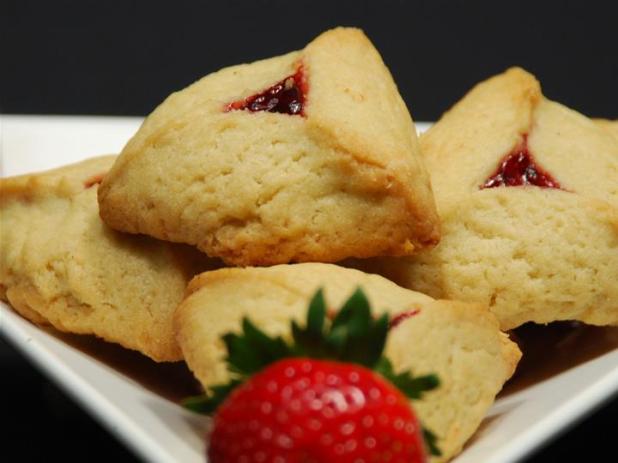 Slightly cakey and not overly sweet, the pastries come in four varieties: apricot, strawberry, raspberry, and prune. Each 6 ounce container has 6  pastries and can be purchased at most Whole Foods, Wegman’s, Roche Brothers, Roots, Dawsons, and Acme, Shop Rite, and Giant on the east coast. The pastries can also be purchased directly from Irene’s for $4.49 for the 6 ounce container. Shipped fresh, the Hamantashen have a shelf life of two weeks. 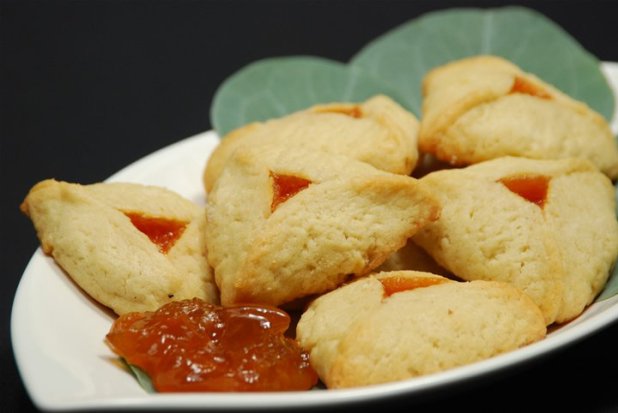 Zingerman’s Bakehouse makes a rich, buttery Hamentaschen (pictured below) in three flavors:  apricot, poppy seed, and vanilla bean cream cheese – each one as delicious as the other. Made with an all butter cookie crust, Zingerman’s Hamentaschen are sold in a 1 pound box with 12 pastries (4 of each flavor) for $30 plus shipping. A wonderful gift for anyone who loves pastry, the Hamentaschen can be ordered on-line at the company website: www.zingermans.com. 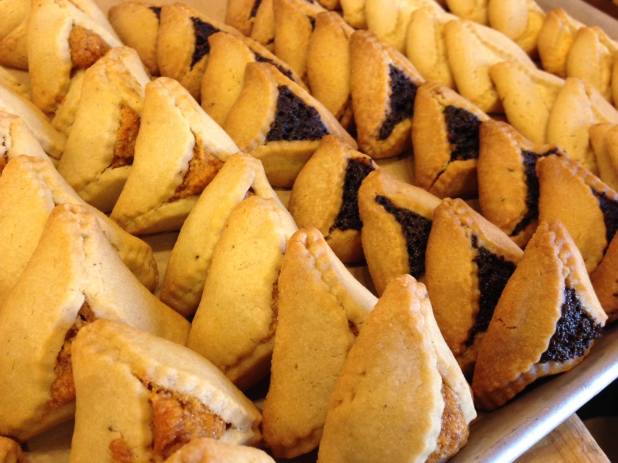