How to Reverse California’s Drought 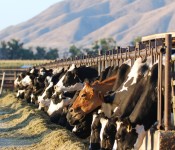 California’s water drought problem has been in the news daily and although thousands of words have been written about this unfortunate situation, there are still a few left to write. California residents have been asked to turn off their sprinklers, stop washing their cars, use water saving toilets and faucets when in reality, only 5% of water consumption is domestic.

Most water (about 55%) in the United States is being used by the animal agriculture industry and yet news organizations – television, newspaper, radio, and even on-line – rarely tell readers and listeners to reduce their consumption of animal and dairy products because more than 90% of the population consume animals products and they don’t want to risk offending the very people who support them.

Enormous amounts of water are needed to raise livestock (cows, chicken, pigs, sheep, lambs, goats, hogs, bison, rabbits, ducks, horses, and more) and produce dairy products and eggs. These animals – especially dairy cows – require vast quantities of drinking water while additional water is required for washing, cooling animal facilities, cleaning animal disposal systems, and watering feed crops. Estimates vary but generally, 60-70% of the grain grown is used to feed animals but we don’t get a pound of meat for every pound of grain fed to an animal. In fact, up to 16 pounds of grain are needed to produce 1 pound of meat.

In trying to understand the relationship between water, animal agriculture, and drought, consider the following:

Wikipedia reports that between 80-85% of all water use in California is for agriculture including animal and crop. So, if people really want to conserve water they need to reduce their consumption of animal products. This is not a message most people want to hear, but it is the truth. Our appetite for meat and dairy is having a dire impact on our environment and the only way to change that is to change ourselves.

See the Cowspiracy website (www.cowspiracy.com), the EPA website (www.water.epa.gov), and the WFN (www.waterfootprint.org) for more detailed information on the statistical data cited.