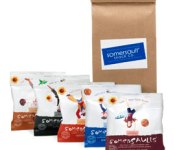 Most people think somersaults are for the young, but a healthy new snack food called Somersaults® is for anyone who has come full circle and now wants a nutrient-dense delicious crunchy snack for themselves and their families. Made primarily of sunflower seeds and toasted grains, Somersaults® come in five flavors:

Somersaults® are scrumptious nuggets that look like a cross between a small cookie and a cracker with 10 major attributes:

The sodium in the Pacific Sea Salt, Salty Pepper, and Santa Fe Salsa is between 240 – 270 mg per serving and, yet these flavors are meant to be salty. The Dutch Cocoa and Cinnamon Crunch have significantly lower levels of sodium – 100 mg and 140 mg, respectively. All five flavors are vegetarian and three of the flavors (Pacific Sea Salt, Crunchy Cinnamon, and Salty Pepper) are vegan.

Somersaults® are available nationwide at fine grocery stores including Whole Foods Market, Target, Safeway, Wegman’s, and Stop & Shop, Albertson’s, and more. To find a retailer, use the store locator (www.somersaultsnackco.com) or purchase on-line through www.luckyvitamin.com, www.soap.com, www.iherb.com, www.drugstore.com or directly from the company’s on-line store: www.somersaultsnackco.com. To obtain a 15% discount (through January 29, 2015) on the 6 ounce packages, enter code “6OZ15” at checkout on the company website.

So, even if you can’t imagine putting your body into a somersault (there are more than 30 different ways), you can reward your body with a nutritious, crunchy, and delicious serving of Somersault® nuggets.