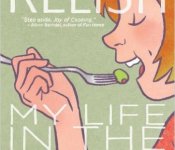 Several months ago, my daughter told me she was reading a graphic novel and I’m ashamed to admit I thought she was reading a book with a triple “X” rating attached to it. Always trying to be open-minded, I asked a few questions and realized a graphic novel is simply a novel in comic strip format. Totally embarrassed by my ignorance, I made a note to self:  stay better informed of current trends in young adult culture. 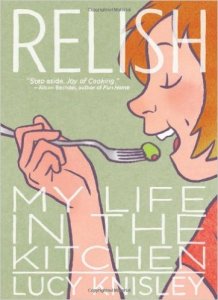 My next mistake was thinking I would never be interested in graphic novels because literature, fictional short stories, history, and clever children’s books are my genres of choice. But, after my daughter took me to an independent bookstore in Ithaca called Comics for Collectors, where I saw a book called Relish:  My Life in the Kitchen, a new chapter opened in my life.

Written by Lucy Knisley, a very talented cartoonist who graduated from The School of the Art Institute in Chicago and earned her MFA at the Center for Cartoon Studies, Relish: My Life in the Kitchen is the work of a food enthusiast, and by no means a food snob (Knisley very much enjoys fast food and “crap” much to her parent’s dismay).

The daughter of two foodies, Knisley was born and spent her childhood in New York City and Rhineback, New York where her mother, a chef ran a catering business. Relish is a 12-chapter book with stories about Knisley growing up (with parents who eschewed sugary cereals, McDonald’s and junk food and glorified fresh herbs, fine dining, and farmer’s markets), traveling, her own forays in the kitchen, and working as a cheesemonger in Chicago after she graduated from college. Disbursed among the illustrated adventures are her favorite recipes with tips for success in the kitchen.

Colorful, creative, brutally honest, and often hilarious, Relish:  My Life in the Kitchen is the journey of one incredibly gifted person who realized her love of food and art can go hand in hand in the literary world in the form of a graphic novel. Now, if I can just get the young adult culture thing down……

Daughter:  Wow, the tallest man on earth is coming to Cleveland

Daughter: (cracks up laughing) Mom, it’s the name of a singer.