Several years ago, Brandon Stanton was an unemployed college graduate struggling to live in New York City when he began photographing people on the streets of New York City. Posting these pictures on a blog he created (www.HumansofNewYork.com), Stanton created an exhaustive fascinating visual catalog of life on the streets of the city, which caused a sensation on the internet. Soon, Stanton’s first book was published – Humans of New York – but Stanton sensed there was more to this photographic journey, that there was a human story behind each photograph which led him to publish Humans of New York: Stories – showing and telling the stories of strangers on the street. 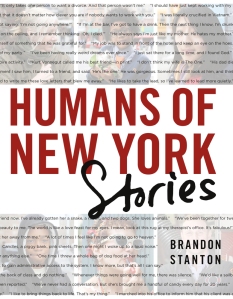 What makes Humans of New York: Stories so fascinating is the story attached to the face. A picture can tell a thousand words but the complexity of our existence is really in the telling of the story. Rarely are we ever let into stranger’s lives and rarely do strangers reveal their struggles, their dreams, their histories, and their illusions. But, somehow Stanton disarmed people to make them comfortable enough to reveal what is often left unsaid. In essence, the author humanized humans in what can be the loneliest city in the world. You will never look at people on the street the same way again.

The other important story is Stanton’s journey. What started out as a personal photography project turned into one of the most popular blogs on the internet with more than 15 million followers. Stanton has created an ongoing documentary that continues to fascinate the humans of the world.