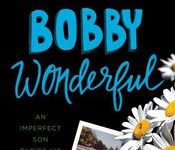 Old age is not for sissies.  Neither is old love, whether you’re in it or watching from the sidelines.    ~Bob Morris

Bobby Wonderful may seem like a strange title for a book but to author Bob Morris, the two words make perfect sense because “Bobby” and “Wonderful” are the last words spoken by his parents before they passed away.  The irony is that the author by his own admission was not a wonderful son (his brother, Jeff deserved that award). He was the   irresponsible fun-loving child, the second of two boys whose job was to lighten the mood and entertain. Jeff, his older brother was the responsible one, the leader driven by duty and purpose who always seemed to make the right decision and be in the right place at the right time (there’s always one  in every family). 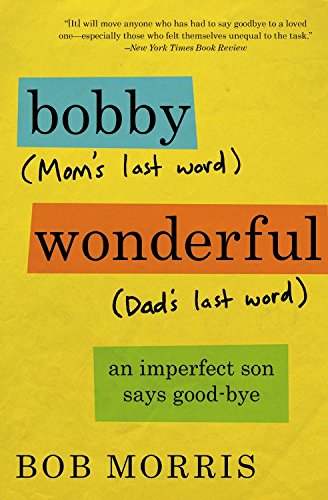 In Bobby Wonderful, the author recounts the last years of his parents lives with humor and insight as he and his brother navigate the maze of healthcare decisions in a system that values the quantity of time over the quality of life. Brutally honest, the author doesn’t sugar coat the journey but instead uses humor and a healthy dose of guilt to balance his desire to have his own life while caring for the two people who loved him more than they loved each other.

Written by a man who admits to loving LaGuardia Airport (clearly the most frustrating and difficult airport to maneuver of the airports serving the New York metropolitan area) and therefore marches to the beat of a different drum, Bobby Wonderful is the story of the imperfect love between a child and his family. When the author’s mother passes away after ten years of poor health, he is both relieved and sad; relived that she is no longer suffering but guilt-ridden that she never stopped fighting to live even when they made the difficult decision to give her morphine to ease her suffering which brought her to death’s door before she was ready.

But, the majority of the book is about his father’s slow decline in the four years following his mother’s death. At first, his father seems to rebound after being released from a 50-year marriage. He leads an active social life, meets an  elderly widow and falls in love although the romance is short-lived. The author wrote about this romance in the New York Times Modern Love column called “My Father’s Last Romance” as a precursory to the publication of Bobby Wonderful, but the real love story is the one between the author and his father which fills three-quarters of the book.

The author asks “Is there a pill a son can take to open his heart to his father?”  He is the son who wants to say “Yes, I’m coming right away. Yes, of course I will be there for you, Dad” when what he really wants is his dad to be who he was – the youthful fun-loving strong man who used to throw his son into the pool – so he would be free to enjoy his life as a newlywed and not be inconvenienced with the desperate needs of an elderly parent in poor health.

At the end of the day, Bobby Wonderful is the heart-warming story of a middle-aged man who realized “It is what is is. So is life. The only thing I can do now for my father is be there for him with all the love I can find.”