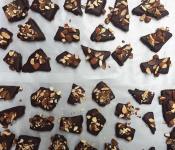 People who follow a plant-based diet may be considered heathens – people who do not follow or belong to a widely held belief or faith – of a different sort because they don’t subscribe to the standard American diet (SAD) – a diet with a heavy emphasis on animal products and highly processed foods.

But being plant-based doesn’t mean you have to give up favorite treats because there are some incredible alternatives out there. Take toffee – a crunchy, rich candy typically made with butter, sugar, almonds, chocolate, and salt – a holiday favorite (although I used to eat toffee all year long). Without butter, how could toffee possibly be toffee?

Where there is a will, there is a way.  Lagusta’s Luscious of New Paltz, New York (with a small store in the East Village at 440 East 9th Street in New York City) makes scrumptious dairy-free toffee which is appropriately named Lagusta’s Luscious Heathen Toffee. I found this store quite by accident after enjoying a delicious burger (the vegan version) at Superiority Burger at 430 East 9th Street, just up the street.

Walking into Lagusta’s in the East Village, my daughter and I asked the shopkeeper if they had any vegan dark chocolate and she said “yes, everything is vegan.” Our jaws dropped as we couldn’t believe our luck (we normally feel lucky to find one or two dark chocolate options in most chocolate stores) and we stared in disbelief at the dozens of options – caramels, bars, truffles, bon-bons, and toffee. My passion for toffee was re-ignited with one bite into Lagusta’s Luscious Heathen Toffee:  crunchy toffee laced with almonds and covered in dark chocolate with more almonds sprinkled on top. 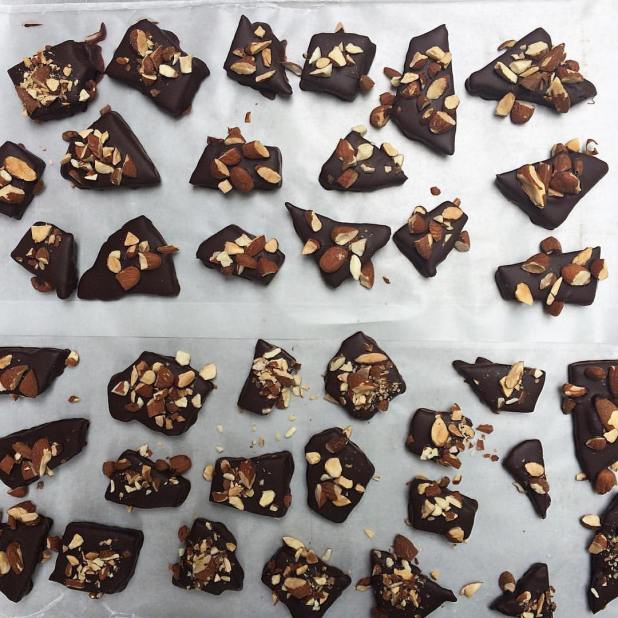 Each 4.5 ounce box is $15 on-line ($20 in the store although they do run specials from time to time where buy one, get one free) and can be purchased at Lagusta’s website:  www.lagustasluscious.com. Store in a cool dry place or in the refrigerator to keep the crunch in the toffee (high temperatures and humidity will take away the crunch of this decadent treat).