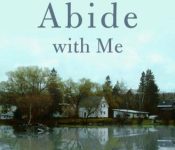 We can wonder if, for all our separate histories, we are not more alike than different after all.     ~Elizabeth Strout

In 1959, life in small town America revolved around family, school, work, and church which was pretty much the same decades before and decades since. Houses may have updated appliances, driveways new cars, and schools fitted with updated technology but people tend to stay the same. They root for a winner but can’t help finding fault, gossiping, and crucifying others for perceived slights, petty jealousies, or simply because they have nothing else to do. And, as soon as a person is knocked down to size, they come together to lift him or her up, rejoicing in their newfound redemption. Such is the story of the townspeople in a small northeastern town in Abide with Me by Elizabeth Strout.

Published in  2006, three years before the author was awarded the Pulitzer Prize in Fiction for Olive Kitteridge, Abide with Me is the story of a young minister – Tyler Caskey – who accepts his first pastoral position in West Arnett, Maine in 1953. Along with his credentials – graduation from seminary school – Tyler  brings his young pregnant wife to live in a crummy old house and expects her to be his wife, a mother to his children, the housekeeper, and a leader of the women’s bible study class.

The story begins in October, 1959 with the reader learning that Tyler is the Pastor of the Congregational Church, the father of two young daughters (2-year old Jeannie and 5-year old Katherine), and a widower of one year. Struggling to deal with the loss of his wife while taking care of Katherine (his mother who lived close by was taking care of Jeannie) who has rarely spoken since her mother passed away, Reverend Caskey has lost his footing in serving the congregation’s needs.

Although the congregants are well aware of the Reverend’s tragic loss, they don’t tolerate any event that takes the focus off their particular problems and what they want.  Yes, it was truly sad that Lauren Caskey died so young and left two small girls motherless, but she was never really one of them anyway. There are pressing issues to deal with at church including the new organ, the budget, counseling, and Sunday school. When Tyler fails to place the proper significance on these issues, his aptitude as a Pastor, father, and leader are questioned.

Abide with Me is the story of human failings, tragic losses, and what happens when one man tries to do the right thing but is not always able in the eyes of those who judge.  A 294-page novel divided into three books: the current times, the years that lead up the current times, and what happens (which does have elements of surprise), Abide with Me is a study of the many facets of human nature. That the title of the book “Abide With Me” is also a popular church hymn asking God to stay present throughout life, its trials, and death is not without significance.

My whole life I have been complaining that my work was constantly interrupted, until I discovered that my interruptions were my work.   ~Henri Noun