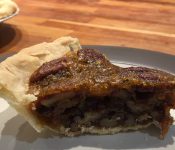 The one question that most people ask when they find out I follow a plant-based diet is:  Do you miss any of the foods you used to eat? Yes, I do, but not many.

I used to miss doughnuts but then I tasted a Cinnamon Sugar Doughnut made by the talented folks at Vortex Doughnuts in Asheville, North Carolina and the experience was pure bliss so I know where to go to get a doughnut fix.  Turtles – those caramel, nut, and chocolate treats – were also a favorite treat but then I tasted Lagusta’s Luscious (available on-line or at their “Confectionary” store in the East Village in NYC)  “Salted Galapagos Turtles” – vegan caramel, pecan, and chocolate turtles that taste just like the non-vegan version, only better!

I also miss good old-fashioned pecan pie made with corn syrup and eggs, the kind with a flaky crust and a gooey inside that is both chewy and crunchy.  There are two ingredients that make the texture of a pecan pie gooey:  corn syrup and eggs. About the only time I won’t rant and rave about using corn syrup is when this sweet ingredient involves a pecan pie but the egg is a problem because I won’t bake with eggs or eat food made with eggs. I’ve tried egg replacers and flax seed meal but was never able to replicate a good pecan pie with these substitutes.

Then, I discovered a recipe for a “Georgia Pecan Pie” by Jenné Claiborne, author of Sweet Potato Soul and found out that she replaced the eggs with mashed sweet potatoes to keep the syrupy pecan filling gooey. And it worked so if anyone deserves an award for figuring out how to make a delicious vegan pecan pie, Jenné Claiborne deserves the credit.

Note:  I make 8-inch pies, not 9 or 10-inch pies, because my crust recipe makes 2 8-inch crusts which is enough for a pie with a crust topping or 2 bottom crusts.  An 8-inch pie crust is also easier to work with. Dough is fragile and the smaller size makes it easier to move the crust from the table to the pan in one piece. I also make 8-inch pies because I have about 1,000 8-inch aluminum pie plates that I have to use up.

Preheat the oven to 275 degrees. Pour the pecans on a cookie sheet and bake for about 15-20 minutes until lightly toasted. Remove from the oven and set aside to cool down.

In a medium-sized sauce pan, place the vegan butter, corn syrup, sugar, nut milk, vanilla, and salt. Bring the mixture to a boil and allow to boil for 3 minutes.  Remove the mixture from the heat and slowly pour the liquid into the sweet potato bowl blending with a whisk to remove any lumps.

Place the pastry flour, vegan butter pieces, and salt in a food processor.

Pulse for about 30 times (DO NOT put on continuous or your crust will not be flakey).  The mixture will look like sand.

Transfer the mixture to a medium-sized bowl.

Sprinkle a tablespoon of ice-cold water over the flour mixture and stir to blend. Repeat with the next 3 tablespoons of cold water. (Note:  Do not use more water or your crust will not be flakey).

Using your hands, scoop up 1/2 of the mixture and gently press into a disk and then place on a well floured silicone rolling pad.

Sprinkle a bit of flour over the top of the disk.

Place a piece of parchment paper over the disk and using a rolling pin, gently roll out the crust to an 8-inch circle.

Lift the piece of parchment paper off and discard.

Gently fold the crust on top of the 8 inch pie plate and gently smooth the crust into the pie place making sure to have about rim.  Use fallen pieces to patch the crust.

Place the empty pie crusts on a parchment paper lined cookie sheet and set aside. 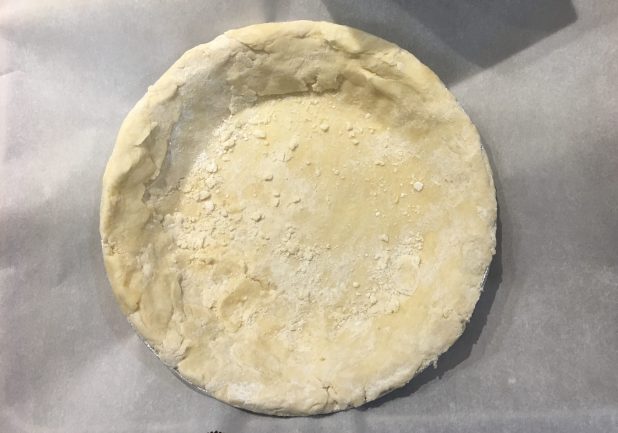 Repeat the above steps for the second crust.

Place the pies in the oven and bake for 50 minutes.

Remove the pies from the oven and allow to sit for an hour before serving. 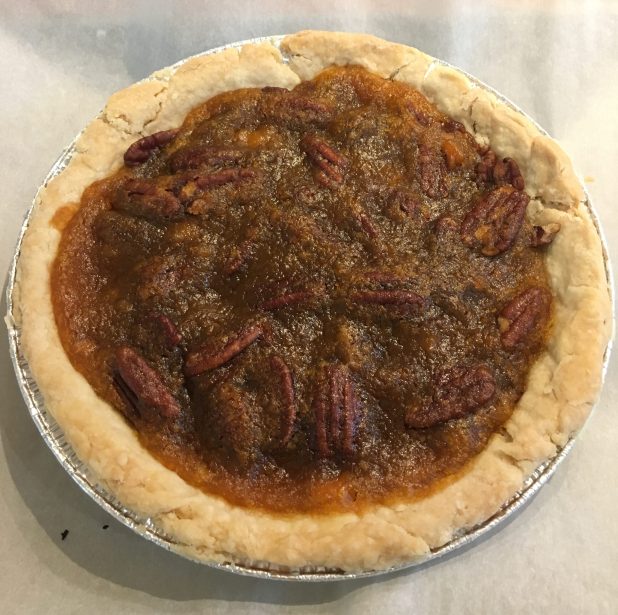 Slice and enjoy. Each pie will serve 6.