Sexual Assault Victims: What I Remember 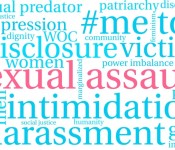 In the summer of 1972 or 1973 when I was 11 or 12 years old, I was sexually assaulted by a gang of boys, which included my five brothers, cousins, and a boy unrelated to me.  I was with my family (my parents, five brothers, aunt, uncle, and cousins) in Maine, staying at a rustic vacation retreat owned by friends of my parents. Actually, the owners weren’t exactly friends of my parents. My father worked with a man named Kearney at Paine Webber whose wife’s family owned the vacation property in Maine. The Kearney’s had several children including a son named Dave who were roughly the same age as us so vacationing together seemed like a good idea.

It was the second or third summer we visited the lakefront property in 1972 or 1973. The adults had gone out to dinner leaving us to entertain ourselves in the big game room, which I remember having a high ceiling, a ping-pong table, and a wide staircase leading to the outdoors. The boys (eight or nine of them between 5 and 12 or 6 and 13 years old) were chasing me and I was running around the room trying to get away from them. Their aggression was fueled by each other’s shouts to tear my clothes off. I was wearing a yellow shirt and they caught me and pinned me down, laughing and yelling while they tore my shirt off. I was 11 or 12 years old and in early puberty with budding breasts that made me very self-conscious. I remember fighting like hell because I was terrified but they were too strong for me and I remember screaming and crying while they laughed as they exposed my breasts. They finally let me up and I ran from the room to a bathroom, locked the door, and collapsed in the corner crying.

My parents, aunt, and uncle returned from dinner and my mother found me in the bathroom. I let her in and told her what happened. She was livid and yelled for all my brothers to come to the great room. She brought me with her and had my brothers line up and told them all to pull down their pants and underpants in front of me. They resisted but she forced them. Her intent was to humiliate them they way they humiliated me but seeing the genitals of my five brothers did not make me feel better; it made everything worse.  I felt disgusted, ashamed, and so alone.  I just wanted to get out of there but there was no escape because they were my family.

My aunt Trudy consoled me that night and my mother insisted I go with her and Trudy the next day to the laundromat for a change in scenery (as if that would change anything). There were no comforting words, no discussion, just an expectation that I suck it up, move forward, and not speak about the shameful behavior of those boys.  We never went back to that camp in Maine because Mr. and Mrs. Kearney didn’t want my brothers on the property again. That was it.

I did not speak of the assault for years because I didn’t want to cast shame on my family. It wasn’t until I was older that I realized how dysfunctional my family was and then distanced myself from them. I moved on with my life but I don’t think anyone ever really moves past the fear, shame and humiliation of a sexual assault. Through the years, I confided in my husband (a truly great man) and a few friends but never intended to make the incident public until I heard the criticism of Dr. Christine Blasey-Ford’s memory in the recent hearings on the sexual assault allegations against Brett Kavanaugh, the Supreme Court nominee. That Susan Collins, the Republican senator from Maine doubts Kavanaugh was the assailant (while believing Ford was assaulted) because there was no other evidence (36 years later) is astounding.

A credible victim who passed a lie detector test and confided in her therapists, her husband, and close friends before anyone knew who Brett Kavanaugh was, Ford was criticized for speaking out 36 years after the alleged assault and for remembering some details and not others. She could remember what she was wearing, who assaulted her, details of the bedroom, the laughter of the assailants, but she couldn’t remember what day the assault happened or how she got home that night. I can completely relate. I know my assault happened and I think it was in August, 1972 (but it could have been July and it could have been 1973); I know my brothers and the Kearney’s son, Dave were involved. Their was an older Kearney son but I don’t know if he was there. I know my cousins were there and that they were very young (two were about 5 or 6 years old). I know I was wearing a yellow shirt and I remember what the game room looked like. I remember their laughter and the frenzy of their hands tearing at my shirt. And, I remember the fear. As Ellen DeGeneres recently said about sexual assault victims:  “you remember what happened to you, where you were, and how you felt.”

I don’t think any of my brothers or any of the boys in that gang would have sexually assaulted me on their own single handedly (I was older than most of them and had the strength to protect myself from a single younger boy but not the older ones or all of them collectively) but when they were together there was strength in numbers with the younger ones going along with the older ones.

It’s been 45 years since that awful evening and yet I still remember what they did to me, where I was, and how I felt. How sure am I?  100%.   I don’t remember the exact date and some of the details of the assault but it doesn’t mean my recollection is not credible.

So, when politicians and others criticized Ford for coming forward, for not remembering the date of the assault or how she got home that night, and then diminish what happened to her (after all, she wasn’t raped, right?), I feel compelled to speak out, to tell them there are details that sexual assault victims don’t remember because more often than not, a sexual assault victim is in a fight or flee mode, focused on who is assaulting her, what the assailant (s) are doing to her, and how to get away.

Put yourself in the uncomfortable position of stepping outside the politics and imagine what you would think if your daughter was assaulted at age 15 or if you were an 11-year-old girl attacked by a gang of 8 or 9 young boys? And, if the not so subtle message was to keep your mouth shut and move on because boys will be boys. How can anyone not feel enraged? And, finally despite Mitch McConnell’s assertion that boys committing sexual assault continue to do so in adulthood, I disagree. Some do but many don’t. Often these boys grow up, go to college, forge a career, get married, have kids of their own, and forget it ever happened.  But victims don’t forget, they may forget some details but they don’t forget what happened, where they were, and how they felt. And, that’s an important point to remember.