Why Isn’t Anyone Talking About Wet Markets and the Coronavirus? 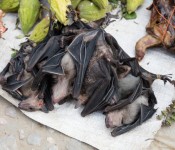 We are being inundated with information about the coronavirus…what it is (a virus), what it does (primarily attacks the respiratory system), how fast its spreading (too fast), whose most susceptible to the danger of the virus (the elderly and health compromised), how to get tested (still unclear and varies depending on location), and how the healthcare system is treating it (primarily with supportive care so the immune system can do its job) but hardly anyone is talking about how the coronavirus started and more importantly, what can be done in the future to avoid another world pandemic.

According to the CDC, coronaviruses are a large family of viruses that are zoonotic in origin meaning coronaviruses originate in animals and are common in many different species, including bats, cats, camels, rabbits and cattle.   Coronaviruses can then infect people and spread between people (such as with MERS-CoV, SARS-CoV, and now with this new virus – named SARS-CoV-2 – which is often referred to as simply “coronavirus” or COVID-19).  The SARS-CoV-2 virus is a betacoronavirus (one of four genera of coronaviruses), like MERS-CoV and SARS-CoV – all three of which originated in bats and passed to humans.

In late 2019, the coronavirus broke out in Wuhan in the Hubei province of China. Several of the early patients were linked to a wet market (where fresh and live animals including bats and cats were slaughtered and sold. The markets are referred to as wet because there is a lot of blood and guts mixed with water on the floor, shelves, and stalls which is how the virus is passed from animal to human: through bodily fluids). But, other patients emerged who had no link to the market suggesting the virus jumped from animal to human and then spread by human to human contact.

China closed down the wet market where the virus originated but wet markets are still operating all over the world although they appear to be more prevalent in China, the Middle East, Europe, and South America than in North America. But, as the spread of the most recent coronavirus shows, it doesn’t matter where the wet markets are BUT THAT THEY EXIST because once the coronavirus passes from animal to human, the virus spreads across the world from human to human and virtually no one is safe from it.  So, the focus needs to be on preventing the animal to human transfer, which has and can easily happen in wet markets.

As the faces of coronavirus victims started to appear on the news and internet, I thought of how that initial bat to human transmission in a wet market in China led to the sickness and death of so many people, seemingly unrelated, thousands and thousands of miles away. And, then I started asking why people are not talking about getting rid of wet markets to stop the animal to human spread of coronaviruses?

Whenever I mention the elimination of wet markets, most people put their hands up and said “that will never happen;  people want their meat.” But, I’m not saying to stop eating meat (although eliminating animal products from a diet and following a whole food plant based diet is better for health and the environment). I’m suggesting the world governments work together to get rid of the what makes the markets dangerous – animals. Offer alternatives. It’s a matter of life and death.