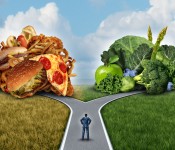 A few years ago I stopped trying to deter people from eating animal products because its an impossible task.  Most people defer to their doctors (most of whom eat animal products) but they should also read the medical studies (who paid for it, how it was done, and what the conclusions were) because these studies provide valuable information (both good and bad).

No one (including me) wants someone giving them bad news about their bad habits. And, yet I still feel compelled to write from time to time about the realities of eating animals and dairy products because the impact on our health and our planet is significant.

Food is emotional and and one of the few things we derive joy from every day.  It’s hard to break habits but if hamburgers, hot dogs, fried chicken, bacon, cold cuts, eggs, and dairy products, and eggs are a regular part of your diet, consider the following: 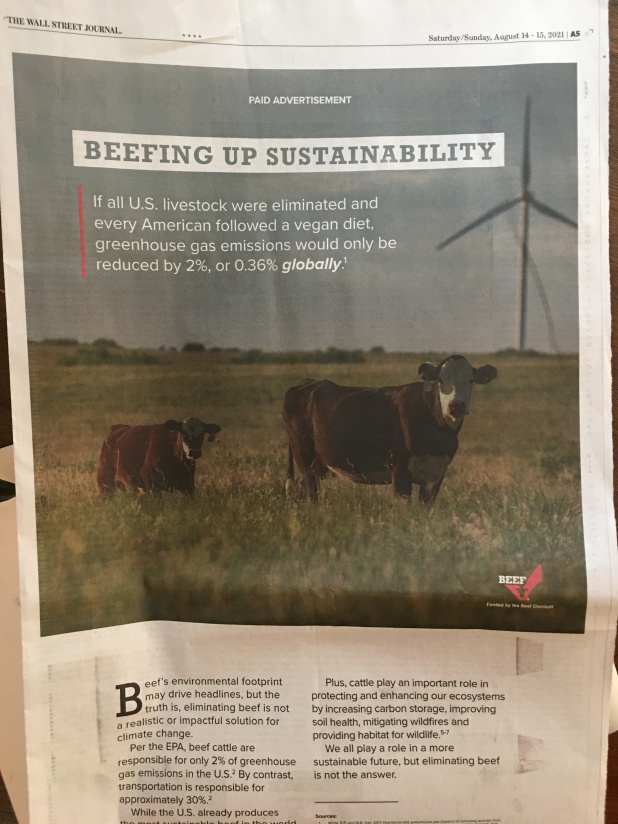 The ad cites the EPA as one of the sources of this conclusion to give creditability but the ad does not state that the EPA is clear in that animal agriculture is the major driving force for methane and that methane has 80 times the warming effect of CO2. The EPA also only looked at warming, and climate change isn’t just about the increase in temperature.  We are growing vast amounts of corn and soybeans to feed 77 billion animals who in turn produce huge amounts of waste that seep into our lakes, rivers, streams, and oceans (as Dr. Garth Brooks points out “why do you think romaine lettuce could be contaminated with e coli, which is an intestinal bacteria?).

The beef industry must be feeling threatened (why else would they place a full page ad in a right-leaning newspaper?).  More and more people are recognizing the health benefits of reducing meat and dairy consumption and the realities of the animal agriculture industry.  The health and environmental impact of our dietary choices cannot be underestimated.  Just ask yourself:  Why is so much land allocated to growing corn and soybeans to feed animals whose parts and by-products adversely affect our health and destroy the earth when we could allocate the land to growing food to feed people directly?  Growing healthy and nutritious food to feed the population is infinitely more sustainable then growing food to feed animals to feed the population.