Children’s Books To Be Treasured

Last month my 15-year old daughter asked me if we could update the playroom in our home. She told me she had outgrown the room and wants it to be more mature….”like for teenagers” is how she phrased it.  I knew this day was coming but still it’s hard to believe the games, toys, and books that defined her childhood are no longer relevant:  the classic wooden blocks that haven’t been used in years, or the “Pretty Pretty Princess” game which was more than likely last used in 2004 when she convinced her three male cousins (ages 9,7, and 6) to play; or the books that I’ve spent thousands of hours reading to her.  They are as much a part of my journey as hers.  She’s just ready to move on while I’m still holding on.

With no television in our home, the day’s activities are determined by the weather: hiking, swimming, kayaking, or water skiing on a sunny day; board games, baking, and reading on rainy days, of which we have many so reading is a big part of our lives. I love books – all types: children’s, teen, and adult – and through the years we have accumulated many. As I started sorting through the books, I made piles to give away, donate to the library, and most importantly, books to keep because they hold a special place in my heart.

My earliest memories of pure pleasure were reading, eating peaches in the summertime, and devouring chocolate. At nine years old bored with class, I would tip the lid of my classroom desk slightly open to read a book tucked inside instead of listening to the teacher.  “Charlie and the Chocolate Factory” and “James and the Giant Peach” by Ronald Dahl were the first two books I read where I could taste the chocolate river or the juice of the peach right off the pages of the books.  These two stories were also books of hope, which I found profoundly intriguing at age nine.

Who could forget the anticipation of Charlie standing beside Grandpa Joe while he opened the Wonka bar to find the last golden ticket?  Or James, hungry and trembling climbing into the hole of the peach to escape Aunt Sponge and Aunt Spiker? Despite bad luck or awful circumstances, Charlie and James would survive and go on to live happier lives. And, that said a lot to me. Still does.

“Owen” by Kevin Henkes and “Officer Buckle and Gloria” by Peggy Rathmann are two books that make me laugh every time I read them.  Owen is the story of a 5-year old going to school for the first time and the dilemma his parents face because Owen wants to take Fuzzy, his beloved blanket.  The humor of the story lies with the parents and the adults that give them advice on how to “convince” Owen to go to school without Fuzzy.

Officer Buckle and Gloria is the story of a conscientious police officer and his talented police dog who give safety speeches at schools. The dog’s talents are unbeknownst to Officer Buckle as Gloria only allows children to see her special skills, which makes the story hilarious. The kids are in on the secret and somehow that reminds me of childhood where kids inhabit a special world while adults are seen as out of the loop.
“Miss Rumphius” by Barbara Cooney was one of my daughter’s favorite books and I’ve read it to her hundreds of times.  Told from the perspective of a child, the story is about the author’s aunt, Miss Rumphius and her desire to travel the world, live by the sea, and make the world a more beautiful place. It’s a life we should all aspire to. 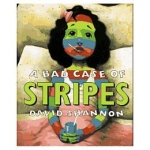 “The Bad Case of Stripes” by David Shannon is one of those books that pop out at the reader  as the illustrations are as strong as the message:  be true to yourself first and consider what other people think as secondary. Every child knows the struggle of trying to fit in and the main character, Camilia learns this life lesson the hard way.

“Charlotte’s Web” by E.B. White is the classic story of Fern Arable, a young girl who saves the runt of the litter, a piglet named Wilbur and the friendship that ensues between Wilbur and a spider named Charlotte.  An amazing tale of compassion, responsibility, friendship, and letting go.

“The Red Balloon” by Albert Lamorisse was written in 1956 and is the story of a lonely boy named Pascal living in Paris who finds a red balloon tied to a street lamp. The balloon is more than a just a balloon though; it becomes his best friend.   Joyful and heartbreaking, the reader is taken on a journey where the ultimate sacrifice is made in the name of loyalty and friendship. The story is as relevant today as it was 55 years ago.

“The Giving Tree” by Shel  Silverstein is a story of unconditional love but from a different prospective than other books. As an adult, I realized this story mirrors every woman’s unselfish journey through motherhood and her ultimate hope that her child will come back one day and just sit with her.
I had all of these books piled on my desk while I wrote this story and at one point, my daughter walked in and picked up “The Red Balloon.” I thought she would briefly browse though the pages and put it back on the desk. Instead, she turned to me and said “Mom, I’m taking this one back to my room. See you later.”  I guess it’s still relevant.