Contemporary Chinese literature is a genre that doesn’t occupy a lot of shelf space in bookstores or on Amazon (only 104 books show up on a recent search) which probably has more to do with repression and censorship than with lack of interest. With nearly 20% of the world’s population (1.5 billion people) in China, there should be an abundance of talented writers whose works are translated and available to the public. Instead, we have but a few writers who’ve escaped from China and been given the freedom to pursue their craft and write without fear of censorship or punishment.

One of these writers is Ha Jin, a contemporary Chinese-American writer who was born in northeast China in 1956.  After joining the army at 13 and serving six years, Jin enrolled in college in China and earned a bachelor’s degree in English  and a master’s degree in Literature. In 1985, Jin came to the US on a student visa to attend Brandeis University on a scholarship to learn to be a translator and then enrolled in the MFA program at Boston University to pursue his studies in poetry and creative writing.  While he was studying in Boston, the crackdown at  Tiananmen Square took place (1989) which prompted Jin’s decision to stay and become a US citizen.

Deeply affected by the Cultural Revolution when he was growing up, his six years in the army, and the pressure exerted by the Communist Party on its people, Jin began to write while in Boston. The events at Tiananmen Square led Jin to write The Dead Soldier’s Talk – a poem that launched his career when it was published in the Paris Review. 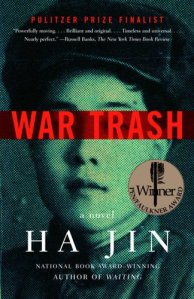 Jin’s works stand on their own but his poetry, essays, short stories and novels have more meaning if the reader has an understanding of the author who tends to use autobiographical details from his own life in his stories, which is not uncommon – many writers use their experiences and knowledge in their work except that their base is from an open culture where they are free to write virtually anything. Jin’s writings come from a different place – knowledge of a closed culture firmly grounded in a sense of duty to the party first and the family second.

One of Jin’s most important works is Waiting – the story of a man who marries out of duty and then falls in love with another woman – because the reader is introduced to a character who denies himself happiness but doesn’t give up on the possibility of having it one day although his life seems hopeless. In our culture, we are taught to pursue passion and eschew duty if it interferes with our ultimate happiness which is in stark contrast to Chinese culture. 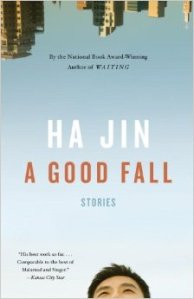 In A Good Fall, the reader gains an understanding of the experiences of the Chinese immigrant in the United States which provides another perspective on contemporary Chinese culture. But, most telling of all is an interview of Ha Jin in the Paris Review entitled Ha Jin: The Art of Fiction No. 202, in which he reveals himself as a deeply thoughtful and driven man who writes about taboo subjects including the Korean War, The Cultural Revolution in China, the Tiananmen Square incident, China’s propensity to skirt international laws, and most importantly, the inability of one to be open with his/her opinions and live the life of choice in China. This knowledge makes his books more meaningful to the western reader and yet his books are unavailable to readers in China because they have been banned in his home country.

A Map of Betrayal (2014) is Ha Jin’s most recent novel and is the fictional story of a Chinese American who becomes a mole in the CIA. The story appears to loosely mirror Jin’s early life in China and the real story of Larry Wu-Tai Chin, a Chinese-American who was recruited to be a translator by the US government in 1948 and exposed as a Chinese spy in 1986.

In the book, the main character, Gary Shang was born in the northern part of China and showed a proficiency in the English language which led to his appointment as a secret agent with the Communist party. He obtains a job as a translator in Shanghai in 1949 which eventually leads to a position with the American Cultural Agency in Okinawa and then to Virginia as a translator with the CIA from 1955 until he is discovered in 1980.

The story begins with 54-year old Lillian, the daughter of Gary Shang (“the biggest Chinese spy ever caught in North America”) and his American born wife, Nellie, trying to piece together her father’s life. Lillian has recently contacted Gary’s long time mistress who sent her 6 volumes of Gary’s personal diaries from 1949 – 1980. Despite the detailed information in the diaries, there are gaps which Lillian is determined to learn in her relentless pursuit of the truth.

In alternating chapters that detail Gary’s years as a spy and Lillian’s pursuit of the truth and a deeper understanding of her father and his family, A Map of Betrayal moves at an unhurried pace – a signature trait of all Jin’s novels (although this novel moves quickly at the end).  Beginning in the post world war years with tension between Taiwan, China, Korea, the Soviet Union, and the United States, the story shows us a man who deeply loves his country and grows to love another country. The problem is that each country only loves itself which creates a no-win situation for anyone who straddles them both.