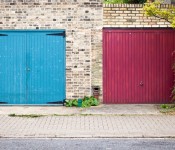 The archive director (Joshua Rothman) of The New Yorker wrote an article for the November 7, 2016 issue entitled “The Enemy Next Door“ which is a must-read for anyone baffled or horrified by the political leanings of their neighbors, friends, and relatives. The article is actually a review of Nancy Rosenblum’s new book “Good Neighbors:  The Democracy of Everyday Life in America” but the insight is equally applicable to friends and family who find themselves on opposite sides of the political spectrum.

If you’ve ever come home from a dinner party mortified that someone you thought was a decent person is actually supporting the “other” candidate, or if you’ve seen a political sign on your neighbor’s front lawn and thought about removing it in the middle of the night, or read political posts by friends on Facebook and briefly considered unfriending them, then read “The Enemy Next Door.” The essence is that “we live in two democracies:  a political democracy, in which we function as citizens, and a democracy of everyday life in which we function as neighbors. These two democracies operate separately, and often at cross-purposes.”

Years ago, when I lived in Madrid, I remember hearing my neighbor screaming at her teenage daughter one night. Her voice reverberated through the walls of our piso (apartment) and I heard a side of my neighbor that I never knew existed. She sounded like a screaming maniac but this was also a woman who befriended me in a country where I could barely speak the language, a woman who left her family and friends at a restaurant one night to take my daughter to the emergency room to be treated for a concussion after slipping on a wood floor at a birthday party. This was a woman who used her insurance card and passed my daughter off as her own to get treatment right away and who took off her blazer and draped it around my shoulders at 3:00 am before she went home to her own family (only to return 4 hours later to the hospital).  In short, this was an incredibly kind and generous woman, a great friend, a person I will be forever grateful for, and a wonderful, wonderful neighbor.  So, when I ran into her in the elevator the day after the screaming outburst and she mentioned that she was very upset with her daughter the night before and hoped I hadn’t been disturbed by her outburst, I told her I didn’t hear a thing. I lied because I cared about the future of our relationship and so I pleaded ignorance. She deserved a pass. This is what Rothman calls the “rhythms of reciprocity” where we often cultivate a studied ignorance for the good of the future.

But, we don’t do this with politics: we don’t act with decency; instead, we confront, villianize, and polarize..and, when we act this way, our relationships with neighbors, friends, and family suffer. “When politics turns against us – when we can’t trust Congress, the courts, or the police – we still look to neighborliness as a source of democratic hope untethered to public political institutions.” But, when those neighbors, friends, or relatives villainize our candidate by posting opposing political views on Facebook or other social media or insult us for supporting the “other” candidate, we feel a personal affront and wonder how did we miss this very obvious character flaw and wonder if this person really is a “good” person. The answer is more often than not, yes. People are rarely ever good or bad and when we see things in black and white, we all lose. The truth is we could all be more decent but we haven’t been.

A few years ago, Jonathan Franzen wrote an essay called “The Ugly Mediterranean” in which he wrote about a trip he took to interview hunters and poachers who were slaughtering migratory songbirds – something he found personally appalling.  Franzen in meeting the “enemy” found people he genuinely liked and “in some cases outright loved” which made him pause as “the blanket antipathy that had come so easy….wasn’t so easy anymore.” Franzen wrote:

When you stay in your room and rage or sneer or shrug your shoulders, as I did for many years, the world and its problems are impossibly daunting. But when you go out and put yourself in real relation to real people, or even just animals, there’s a very real danger that you might end of loving some of them.

The point is that we can all become better neighbors, friends, and family members by being decent, civil, and respectful. Your feminist friends may have voted for Trump along with half your classmates from B-school, and the neighbor next door but these people are not bad. They truly believe they are doing what is best for the country (as misguided as they may be). You don’t have to belong to the group; you can look the other way, continue your “fight” in more productive ways, and as Rothman suggests “do a little less Facebook” and a little bit more neighboring.

To read the full article (which is called “Red Neighbor, Blue Neighbor” on-line), click on the title:  “The Enemy Next Door.”