Life Among the Savages

Sometimes a book reminds readers that our lives never really change despite the outside factors that seem to change daily. We write but the computer has replaced the typewriter, we raise children but the social norms change; we drink milk but we buy the containers at the grocery store instead of having them delivered; and we drive cars but with seat belts and air bags. Yes, progress allows us to do things differently but it doesn’t take away the core aspects of our lives: to grow, learn, love, procreate, work, eat, survive, struggle, and die. Life Among the Savages is just that book.

Written by Shirley Jackson (1916-1965), an American author most famous for “The Lottery,” (1948), a short story originally published in The New Yorker that shocked readers by showing the dark side of human nature in a small town and which seems to be the precursor for The Hunger Games, written 55 years later by Suzanne Collins, Life Among the Savages is about family life in a small town in Vermont in the 1940’s.

The world has changed a lot since then – gone are the days when teachers spanked children, when small children walked alone to school or when milk men delivered glass jars of milk to the front door, and when women could count on spending 10 days in the hospital after giving birth (the author notes that the reason most third children were born in the 1940’s was so that a mother could take a much-needed break from her two little ones at home). But, parents – and particularly mothers – still deal with kids’ clutter, sleep deprivation, au pair problems, childcare, sibling rivalry, picky eaters, the PTA, the difficulty of shopping with children, annoying parents, and the day-to-day tribulations of parenthood. 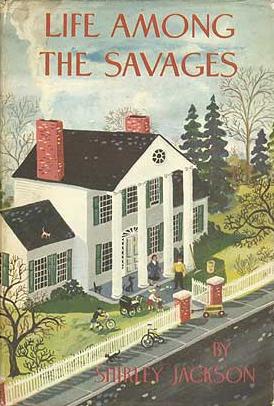 In Life Among the Savages, the author writes about the early years of her marriage when she was busy having babies, running a household, finding time to write, and building a life with her husband in a small town in Vermont. Hilarious on so many fronts, the author not only laughs at the absurdity of the crazy things we do as parents but also at herself for getting pulled into meaningless confrontations, negotiations with her kids, and for defying cultural standards by being a writer and not the typical stay-at-home mom of the 1940’s and 1950’s. Helicopter or Tiger mom she wasn’t.

I wish I read this book 20 years ago, before I was faced with the demands of motherhood, the crazy, judgmental and competitive world of other moms, and the pressures of school, performance, and achievement because I wouldn’t have sweated parenthood so much. Who cares if the kids take off their socks and shoes every time they get in the car or that we’ll be late again? Does it really matter that the kids missed pre-school three times this week? Shirley Jackson’s writing makes readers feel they are in the company of a special laid back sisterhood that requires above all else, a sense of humor. And, that is the reason this book feels contemporary despite the passing of 63 years since its publication. Shirley Jackson was a woman ahead of her time who wrote about all times; and for that she deserves our gratitude and praise.