Your eyes water up when you watch certain movies, you have dropped tears onto the pages of numerous books, you have cried at moments of immense personal sorrow, but death freezes you and shuts you down, robbing you of all emotion, all affect, all connection to your own heart.

On the eve of Paul Auster’s 64th birthday, the author sat down and penned a memoir called Winter Journal. Published in 2012, Winter Journal is not an “I did this; I did that” account of his life (although there is a bit of time-centered personal detail in the book) but more of a “I felt this; I felt that” type of story as he recalls how he reached a milestone where the world no longer considered him young or even middle-aged. 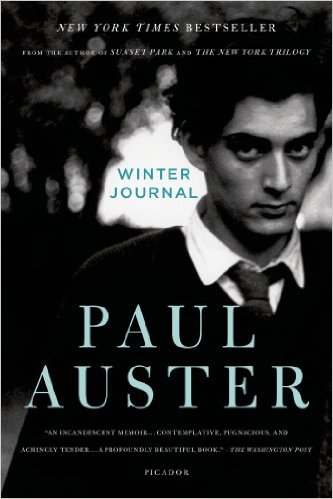 Perplexed at how fast the years have gone by and that most of his life is behind him, Auster becomes introspective and pieces together his life by drawing upon his memories of childhood, adolescence, young adulthood, and middle-age.  At times, he uses facts – addresses and years – as if reconstructing the details of a  life that may soon be forgotten if not recorded on paper – while the bulk of the book is devoted to what he did, how he felt then, and how he feels now that he can look back with the wisdom gained through experience and age.

Auster gives credence to memories but also to the limitations of the mind as we age – childhood realities and imagination, the self-absorption and insecurity of adolescence and young adulthood, and eventually the mind that is not necessarily enlightened but capable of great introspection. But, the real strength of the novel is the risk he took by writing about the shameful aspects of his life:   when he didn’t speak up when he should have or when he spoke up when he shouldn’t have.

Born in 1947, Paul Auster was the first child of a woman barely out of adolescence who married the wrong man. With a father always working, the author recounts how his mother was the defining influence of his childhood and yet he questions whether he ever really knew her, a woman he describes as wearing three masks:  the diva who sought attention, the devoted and loving mother, and the neurotic phobia driven woman whose anxiety drove her away from the life she wanted.  When she passed away in 2002, he at 55 years old was both sad and relieved – two opposing feelings that left him panicked and unable to reconcile what was happening to him.

Winter Journal is Auster’s story in his own words as told to himself. Written with compassion for himself, his family, and even those he barely knows, the story shows the reader how utterly normal this incredibly gifted writer is. He reflects on body parts, his parents and extended family, his early struggles to be recognized as a writer, his sexuality, a short-lived first marriage, his shortcomings, and the woman – his second wife – who has been by his side for decades despite his penchant for alcohol and cigarettes.

Described as one of the most beautiful men on earth – and he is indeed very handsome – Auster’s looks are secondary to his talent as a writer, a man who comes across as genuine, fallible, and unfailingly human whether he is describing the delight he felt as a child when he realized the top of his penis looked liked a fireman’s hat, the compassion he feels for a fellow writer whose daughter was recently murdered, or his own panic attack in 2002 that led him on a path to better understand himself. It’s this humanness that he so freely gives the reader that makes this book so special.

We are all aliens to ourselves, and if we have any sense of who we are, it is only because we live inside the eyes of others.