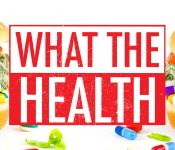 Renegade filmmakers Kip Anderson and Keegan Kuhn are at it again. The duo’s first foray into filmmaking in 2014 resulted in Cowspiracy – a documentary about the effects of animal agriculture on the environment. The film was an eye-opener for the public, most of whom are had no idea the animal agriculture industry is the number one cause of global warming, water depletion, and water deforestation.

Anderson and Kuhn decided to create a second documentary – What The Health – to explore the effect of an animal based diet (meat, poultry, pork, fish, dairy and eggs) on personal health and the information is as shocking as the effects on the environment, albeit a bit more close to home because they expose the inherent conflict between the medical industry, patient advocacy groups, the food industry, pharmaceutical companies, and our government.  The filmmakers interview doctors, public health officials, dietitians, and leaders of the major non-profits in health to establish the indisputable truth:  eating an animal product based diet is detrimental to the health of humans. 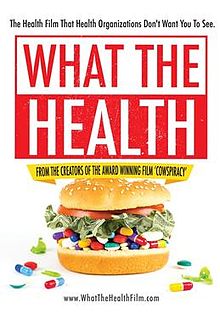 Most people know that heart disease is the number one cause of death in the US followed by other illnesses including cancer, respiratory diseases, stroke, dementia/Alzheimer’s, kidney disease, and Type 2 diabetes. But, what they don’t realize – or grossly underestimate – are the effects of diet on health because we have been conditioned to rely on the medical field, pharmaceuticals, the government, and patient advocacy groups who don’t always have our best interests as a priority.

Instead of looking for causes (and most are not genetic despite claims made by many), patients seek treatment to alleviate the effects of illness and since most doctors are not trained in nutrition, they tend to provide a prescription or offer surgery instead of telling patients to change their diet. High cholesterol is treated with statins, high blood pressure with beta blockers, diuretics, and ACE inhibitors, Type 2 diabetes with insulin and other drugs, and heart attacks with by-pass surgery and stents – none of which reverse disease.

The USDA has the dual responsibility to protect the public health and promote farmers which presents a conflict of interest. And, the non-profits…..they present themselves as organizations trying to inform, prevent, and treat disease and yet, they don’t promote a diet that can reverse or cure the illness.

The answer is astounding. Simply stated, these organizations – mostly government and non-profits – accept donations from the companies processing or making these animal food products and from the organizations whose purpose is to promote these products. The Susan G Komen organization accepts funding from Yoplait despite the medical research studies that link milk and dairy products to breast cancer; the American Diabetes Association offers diets with meat and dairy products on their website despite the studies and medical research that shows Type 2 diabetes is caused by consuming animal products; not sugar.  The American Heart Association recommends eating processed meat despite the World Health Organization showing these products to be carcinogenic and not only a contributor to heart disease but also colon cancer.

The bottom line is that people have to take responsibility for their own health and not rely on the organizations who represent themselves as an advocacy group, especially those who are making money off illness. Think about it. Does anyone really believe the pharmaceutical companies promoting statins (a $35 billion industry) want to see people lower their cholesterol by changing their diet?

Although the movie is clearly biased, the bias has a strong foundation in truth which directly clashes with a culture that describes itself as being all about “baseball, hot dogs, and apple pie.” Because people don’t see the effects of eating a cheeseburger and french fries immediately, and because of the great enjoyment people take in eating these foods, along with the strength of the animal and food lobbyists, the proponents of a plant-based diet face an uphill battle. As Anderson and Kuhn point out, all these industries have to do is raise doubt and people will throw up their arms in confusion and eat what they enjoy:  hot dogs, hamburgers, cold cuts, bacon, white bread, milk, ice cream, and processed foods.

If the movie has any shortfall, it is the message that a plant-based diet prevents and cures. Often it does, but following a plant-based diet does not mean people won’t get cancer, heart disease, Type 2 diabetes, and other diseases (there are vegans out there who regularly consume unhealthy processed food, potato chips, french fries, and Oreos). A person’s chances are simply much, much lower if they follow a whole grain plant-based diet low in saturated fat. And, there is the quality of life issue. Most people simply feel better and have more energy on a whole grain plant-based diet enabling them to enjoy their lives without the effects of illness and medication for a longer period of time. People will still get sick. We will all die. We just don’t have to be the cause and that’s the point. For many people that is enough. For others, it isn’t. We all have our own journey; some are open to change, others are not.  But, the public should demand good information.

Released in March, 2017, What The Health is 90 minutes long – well worth your time – and is currently available on Netflix.