Kenchi is not your ordinary kimchi – a traditional South Korean side dish made with salted and fermented vegetables seasoned with spices. Made on James Island in Charleston, South Carolina by Kenchi Ferments, Kenchi is a crisp, fiery, crimson version of kimchi made with cabbage, radish, beets, carrots, ginger, salt, green onion, shallots, garlic, and Thai pepper. Bright and bold, Kenchi is the American south’s version of a spicy Korean crisp vegetable salad.

Raw, vegan, gluten-free, dairy-free, and full of probiotics, Kenchi is made without heat to preserve the nutritional benefits of eating the fermented vegetables.  No preservatives or artificial flavors or colors are used to make this crunchy, delicious blend of vegetables and spices. 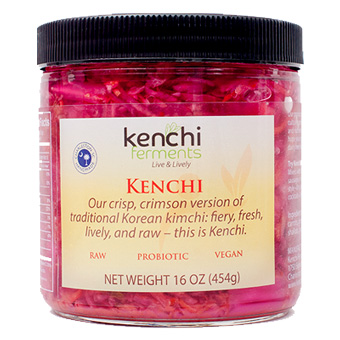 Open the jar and the first aroma is garlic followed by pepper and green onion. For those who like a spicy slaw-like salad, serve as a side dish right out of the jar. For those less adventurous, add a few tablespoons to cole slaw to spice it up. A little bit goes a long way. Kenchi is also delicious as a topping on your favorite veggie burger. Or mix a few tablespoons in a big bowl of steamed string beans for a different take on green bean salad.

Sold in 16 ounce glass containers, Kenchi sells for about $12.99 at most Whole Foods in the southeast region. Use the company locator to find a retailer.

To read more about Kenchi and other products made by Kenchi Ferments, go to the company website:  www.kenchiferments.com.