Say It Ain’t So, Christo! 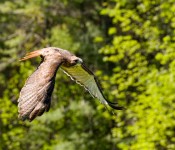 If you live in New York City, then you can’t help but be captivated by what’s going on in the city’s parks and particularly with the winged creatures who place a high priority on space and fight about territory as often as their human counterparts.  But, if you don’t live in the city – and The Real Housewives of New York City is not your idea of turf warfare – read on.

Tompkins Square Park – a 10 acre park in the East Village – used to be one of the grittier places in New York City but has now become center stage for a hawk named “Christo” who is definitely the alpha male in Alphabet City (a neighborhood in the East Village whose name references Avenues A, B, C, and D – the only avenues in Manhattan to have single letter names).

Dubbed the “red-tailed stud” by the New York Post, Christo’s nesting activities and wandering eye have made front page headlines in many newspapers including the New York Post, and radio shows in recent months as Christo’s every move is chronicled by birdwatchers, photographers, bloggers, neighbors, and tourists.

Seems Christo is a player, an opportunist, or a “douche,” depending on who you talk to. Most New Yorkers know that Christo – the red tail hawk also known as the “claw-sanova” – has been servicing not two, but three chicks at the same time. That is until Dora, his long-time mate, was attacked by the competition, re-injured her wing and went back to rehab, leaving Nora and Amelia to duke it out for Christo’s affection.

To read up on Christo’s shenanigans with Dora, Nora, and Amelia, click on the links below: