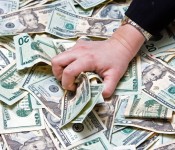 The National Retail Federation (NRF) is a non-profit, tax-exempt 501 (c) (6) – a membership based trade association  – whose mission is to “advance and protect the interests of the retail industry and to help retailers achieve excellence in all areas of their business.” That’s quite a mission, given the retail environment in this country.  Retailers – both national chains and local – are closing daily.

Often referred to as the “voice of retail,” the NRF raises about $60 million annually with most revenue (about 80%) coming from events (an annual convention and about 20 conferences and workshops) and special projects. Membership dues only provide about $8 million (or about 12% of total revenue) annually to NRF. So, this organization is an event-centered trade association.

In 2017, the NRF reported total revenue of $60 million.  In 2017, expenses totaled $60 million.  Although the organization typically spends as much as they bring in, the NRF has managed to accumulate $33 million in net fund assets by 2018.

The organization’s three largest expenses in 2017 were:

5 of the 8 most highly compensated employees are male while 3 are female.

36 independent contractors received more than $100,000 in compensation. The five most highly compensated were reported to be: