Luke, my beloved pear-shaped, black and white cat with a big black heart on his chest passed away this week  after suffering from kidney disease.  He came into our lives on August 4, 2009 and he left our lives on August 18, 2022 when he was just 13 years old.

My sweet Luke was supposed to live twenty years (that’s how long everyone told me cats live) so I didn’t expect to be writing a memorial to him in 2022 but kidney disease robbed him of more time so I find myself writing this years before I thought I would have to. I keep thinking it wasn’t suppose to end this soon.

We first spotted Luke trying to cross Highway 8 outside Binghamton, New York.  An 18-wheeler in the opposite direction had slowed down and was trying to avoid a little creature crawling on the road. I quickly pulled over, grabbed a towel and picked up a tiny little kitten.  His eyes were crusted shut with dried pus; he was missing hair and he was so small he fit in the ball of my hand. He felt so soft – as if he had no bones – but when I placed him on the seat, he showed his strength by climbing onto the console and drinking the milk out of a to-go container in the cup holder.

I plugged “vet” into the GPS and found a country vet about 5 miles away. I called and the receptionist was so kind; she told me to come right over.  The veterinarian examined him estimating he was 3-4 weeks old (we assumed 4 weeks and decided July 4th would be a perfect birthday for this little firecracker), had infected eyes, was dehydrated, malnourished, had fleas and mites but nothing that good meds and nourishment couldn’t cure. So, we decided to take him home to nourish him back to health, and find him a home, because I was allergic to cats.

We stopped at Walmart and bought him a blanket (which he used his whole life) and other necessities including a tiny collar with a little bell (so we wouldn’t lose him in the house) and drove the few hours home.  When we reached the house, he was greeted by Daisy, our 2-year old corgi who was not very happy that a kitten was joining the family (Daisy was attacked by 2 mother cats when she unknowingly walked too close to their litters on a farm). 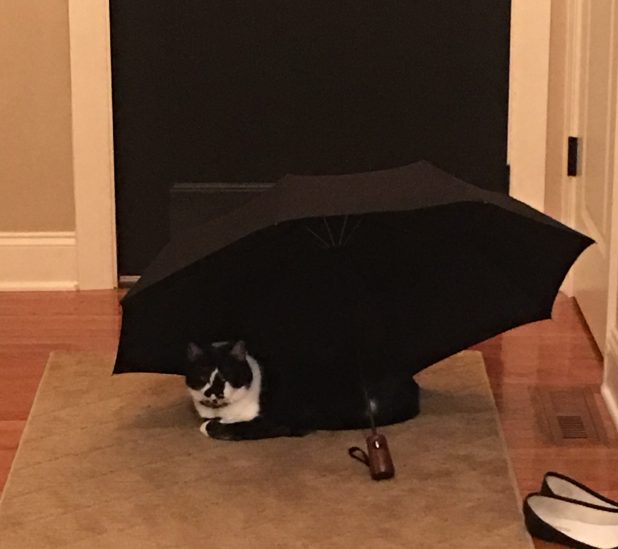 Luke looked to Daisy as his mother and even tried to nurse off her but Daisy wasn’t having it.  Still, Luke worshipped Daisy and groomed her eyes and ears nearly every day.  We use to always joke that the relationship worked because Daisy loved Daisy and Luke loved Daisy.  Although Luke always had the power to  take a swipe at Daisy and put her in her place, he never would. He loved her and always deferred to her.

While we were nourishing Luke back to health, I researched how to live with a cat and learned that a weekly bath would minimize dander along with changing the vacuum bag every week, and always washing my hands after petting him.

The first few months were tough but gradually my allergies tapered off and I was fine.  We kept him indoors (so the coyotes would’t get him which led to a family joke about me thinking there was a coyote behind every fern; admittingly, I was protective) or in a front-carrying “backpack” that he would settle in and poke his head out every once in a while.

Luke grew and grew but when it came time to find him a home, we just couldn’t give him away.  We fell in love with him.  He never asked for much, was always content to just be part of the family, and willingly let me give him warm baths, cut his nails, and brush him. He was also incredibly affectionate and loved for me to carry him over my left shoulder so he could see everything going on around him.  And, every morning Luke snuggled beside me  while I drank a cup of coffee.  And, when Luke wanted my attention, he would usually make this little growling sound or bring me a stuffed mouse as a gift.  I grew to learn the differences in his meows and what he wanted.

Luke was also smart – smarter than any dog I’ve ever had.  He knew how to open doors and when I told people this, they looked at me as if I was nuts until they saw what he could do.  If a door was closed, he would jump on the furniture or washing machine or anything that was by a door.  Then he would use his paws to turn the door handle really fast and the door would open. He would then jump down to the floor and walk though the doorway with all the confidence of Houdini. He really was magical.

I used to tell people that Luke was the sweetest thing that every walked the earth and he really was. He loved people, flowers, adored other dogs (even the 100 pound Swiss Mountain dog across the street), car rides, and eating.  In fact, he loved eating so much, he grew to 18 pounds. 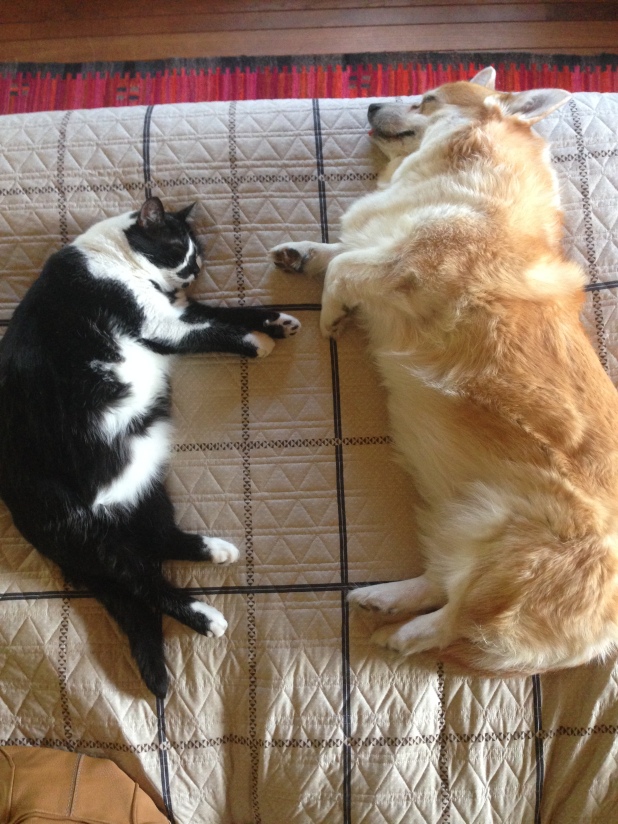 When the vet weighed him during an office visit, she turned to me and asked “What are you feeding this cat?” to which I answered “obviously too much.”  She then read me the riot act about the risks of diabetes and that he should be no more than 14 pounds and to cut the food in half.  I cut his food back but reduced it very slowly and he eventually (5 years) got down to 13 pounds where he stayed.  But, he still had his appetite so I had to dedicate a bedroom for his use at night so he wouldn’t wake me at 3 am for food.

Luke’s favorite food was ham but it had to be good ham.  When my husband brought home a Cobb salad from a local grocery store with chopped ham in it, we gave him a little piece.  Luke turned his nose up and walk away as he didn’t like cheap ham; he preferred Boar’s Head ham so every day I gave him a few pieces of his favorite ham.  If I happened to forget, he laid across the butcher block facing the refrigerator to remind me. Luke was a total carnivore and never wanted anything to do with vegetables or grains. 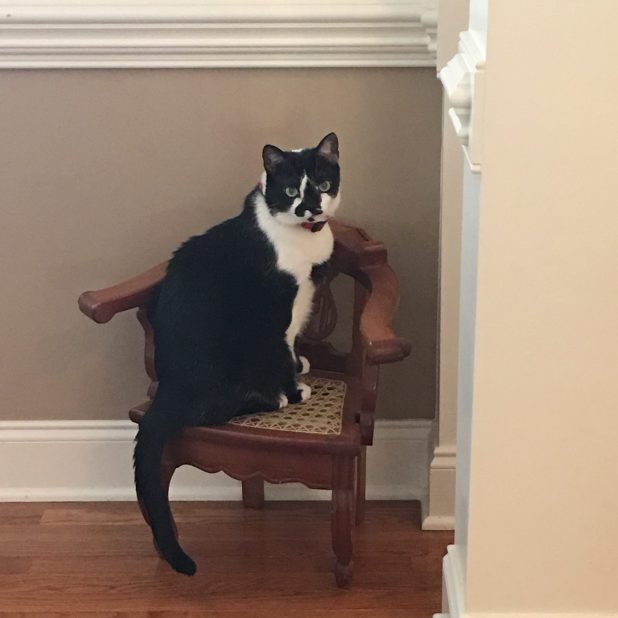 Before Luke passed away, I took him to the vet because he appeared to have a tooth infection but it turned out the infection was the least of our worries.  Bloodwork revealed he had advanced kidney disease, which was a devastating diagnosis as I knew that meant he had little time left with us. After 3 days in the ICU and no change in his creatinine levels (below 2 is normal, 5 means the kidneys are functioning at about 10%; Luke was at 13), I made the decision to bring him home.

The decision was agonizing because I knew the support the ICU provided was helping him stay hydrated but I also knew he was miserable.  He was afraid of veterinarian offices and even on sedatives would fight like the “spicy” cat he was.  On the day he was admitted to the ICU, he had gabapentin and a sedative in his system and still he fought.  Lying in my arms fighting sleep, he let out a hiss every time the door opened and the technician came in.  He wasn’t going willingly but at that point, it was in his best interest to be treated.   Leaving him there felt like the ultimate betrayal because he didn’t understand I would come back.

There must be a lesson in losing a beloved animal, or maybe it’s the price of love. Despite the grief and gut wrenching pain of loss, I wouldn’t have changed a thing.  I never thought I would have a cat and if Luke hadn’t come into my life the way he did, I would have lost even more and never known it.  I had 13 great years with my boy.  I remember telling an old friend about finding Luke and that I never knew I was a cat person.  She smiled and said “You always were a cat person. You just didn’t know it.”  She was right.  Fate brought Luke to us and love kept us together. Rest in peace my sweet boy.  You were so loved.  Thank you for sharing your life with me.