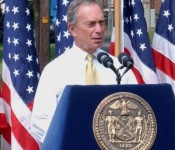 Why Bloomberg Should Run For President

Politics is one of two topics (the other being religion) that should rarely be talked about because most people feel passionately about their beliefs and don’t want to change their minds.  They don’t want to hear an opposing opinion which is generally why most people hang out with people just like themselves.  There’s a comfort in being with like-minded people except that the world becomes very small and isolating. Given that we live in a global world with complex economic, environmental, and social issues, we need to ensure the next leader we elect as President isn’t part of the us and them political parties.  END_OF_DOCUMENT_TOKEN_TO_BE_REPLACED

At my core, I am a social liberal and fiscal conservative which makes the choice of whom to vote for very difficult. Always reminding myself not to be a single issue voter, I compiled a short list of issues that are important to me and then thought about which candidate would be a stronger supporter of each issue (in parenthesis): END_OF_DOCUMENT_TOKEN_TO_BE_REPLACED